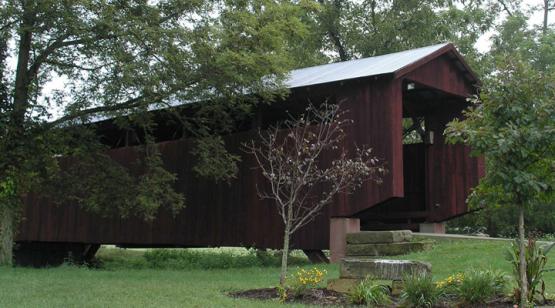 Built in 1881, John Bright #2 covered bridge originally spanned Poplar Creek on Bish Road near Baltimore, Ohio. It is named after pioneer settler John Bright, whose family farm was located near the original site. August Borneman of Lancaster, the leading bridge builder in the area, built the 70-foot span for a cost of $927.50. The bridge features a rare inverted bowstring truss and a unique metal sway bracing system. Sometime later a wooden arch was added. Ohio University Lancaster Dean Ray Wilkes led efforts to save John Bright #2 after it could no longer carry vehicular traffic.

Video Above: Ohio University Lancaster staff and faculty tell the story of how the John Bridge No. 2 Covered Bridge was moved to campus in 1988.

In April of 1988 the bridge was moved 12 miles from Poplar Creek to Fetter’s Run at Ohio University Lancaster, where preservation efforts on the bridge were undertaken. Cooperation among Ohio University Lancaster, Fairfield County, local businesses and organizations, and volunteers enabled the completion of the project in 1990. John Bright #2 is a testament to innovative bridge building techniques in the late 19th century and community cooperation and pride more than 100 years later. 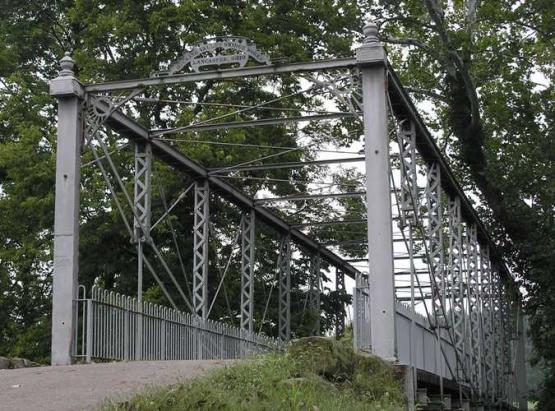 In 1883, Fairfield County hired Borneman to build another bridge over Poplar Creek, this time on Havensport Road around the corner from John Bright #2. The new bridge, which became known as John Bright #1 Iron Bridge, replaced the Smith Mill Bridge, which flooding may have damaged. John Bright #1 is very similar in design to its older sibling John Bright #2, although it is an all-metal suspension bridge. Carnegie Steel Company manufactured the steel. Like its covered counterpart, John Bright #1 has an inverted metal arch and Borneman’s trademark metal sway bracing system. But it has an additional feature—a stylized nameplate proclaiming the name of its builder, “Hocking Valley Bridge Works, Lancaster, Ohio.” The county paid Borneman and Hocking Valley Bridge Works a total of $1920, almost twice the cost of John Bright #2, for his all-metal bridge.

In 1988, Ohio University Lancaster Dean Ray Wilkes contacted Reef about possibly adopting John Bright #2 after seeing an article in a local paper about Reef’s efforts to find new homes for the county’s historic bridges. Wilkes and other university staffers worked with Reef and many community organizations and volunteers to relocate and restore the historic bridge. The dedication for the relocated bridge took place on October 28, 1988. It took two more years to complete the restoration of the bridge. In the end, preservation of John Bright #2 cost more than $15,000, with Fairfield County, Ohio University Lancaster, and local citizens and organizations all helping to cover the cost.

The restoration of John Bright #1 required a much bigger community effort and took much longer to accomplish. After the county disassembled the all-metal bridge and transported it to the Ohio University Lancaster campus in 1991, it took another eight years to reconstruct and rehabilitate the bridge. Budget constraints and the death of Dean Wilkes in 1994 forced the postponement of reconstruction plans. In 1996, however, new Dean Charles Bird reached out to the Lancaster Festival to help revive the project. University and festival staffers worked together to develop a restoration plan and apply for a grant to help pay for the nearly $87,000 it would cost to restore the bridge. Although the grant request was denied, Festival Board member David L. Johns was determined to complete the project. He persuaded community and business leaders to lend a hand. In the end, university and festival personnel, local businesses, and community volunteers donated countless hours, materials, and services to restore the bridge. After Johns passed away in December of 1998, his family donated the funds needed to finish the project. In July of 1999, John Bright #1 took its place alongside John Bright #2 across Fetters’s Run and welcomed visitors to the Lancaster Festival.

For more information about the bridges read an article[PDF] by Nevin published in Fairfield Heritage Quarterly.