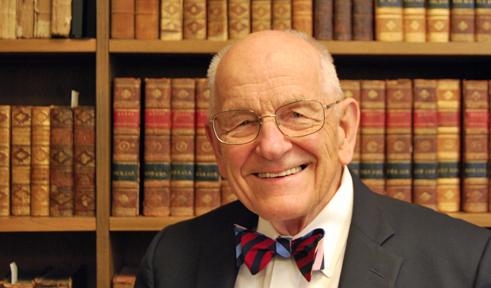 Ohio University, Institute for Applied and Professional Ethics, Executive Board, 1989-2006.

Philosophy of Sex and Love

Humanization in a Technological Era

Stories and the Pursuit of Meaning

Development of the Judaeo-Christian Tradition

Integration of Art, Knowledge and Conduct

Dissertation: "A Discussion Relating to Humanization: Marx, Koestler and the Christian."

Thesis: "The View of Love in the Major Works of Nels Ferre and Erich Fromm Compared with the Biblical View as Presented by Certain Biblical Exegetes."

Thesis: "The Impact of Christianity Upon the Development of Philosophical Thinking."

The Scholarship of The Board of Governors of the University of Alberta, 1952-53.

The University of Alberta Economics Prize, 1953-54.

Macmillan Interdisciplinary Handbooks: Philosophy, 10 vols. Editor in Chief. Farmington Hills, MI: Macmillan Reference USA, a part of Gale, Cengage Learning, 2016-2017.
(NOTE: The goal of these ten handbooks was to provide discussions of philosophical topics that would be accessible to philosophical novices but also respected by informed scholars. Two colleagues from Ohio University – James Petrik and Arthur Zucker agreed to serve as Associate Editors for the project and ten teacher/scholars agreed to serve as individual volume editors.)

Encyclopedia of Philosophy. Second Edition.10 vols. Editor in Chief. New York: Macmillan Reference USA, 2006.
(NOTE: The first edition of this Encyclopedia became the standard reference encyclopedia for the discipline. Building on the first edition, the second edition pursued that same level of excellence. Twenty-one distinguished scholars served as subject editors for the various subfields in philosophy. The new 10 volume set contains approximately 3,000 entries signed by the contributing scholars along with bibliographies and a detailed topical index. This Encyclopedia was selected by Choice in 2007 as one of “the most significant print and electronic works reviewed in Choice in the previous calendar year.” The Encyclopedia was also named to Booklist Magazine’s Editors’ Choice elite list as one of the outstanding titles for 2006. The Encyclopedia also received the 2007 Emerald Literati Network Award from Emerald Group Publishing in the U.K. for the best print reference work.)

"The Closing of the American Mind: A Response," The Ohio University Arts and Sciences Forum, Vol. IV, No. 4 (January, 1988).

Co-editor of special edition of Listening on the subject of medical ethics. Vol. XXII, No. 1 (1987).

Elected to membership in the Cosmos Club of Washington, D.C., 2004.

Chair, The Alumni Board of The Ohio Humanities Council, 1985-87.

Fellow of the National Humanities Institute at the University of Chicago, 1976-77.

2006 - $10,000 from the Philosophy Department’s Spetnagel Research Fund to support continuing research and writing

2002 - $1,370 from the Philosophy Department’s Spetnagel Research Fund to purchase a Dell Inspiron 2650 laptop computer to support The Encyclopedia of Philosophy, Second Edition.

2002 - $1,825 from three sources: the Ohio University Research Committee, the Dean of Arts & Sciences, and the Philosophy Department to upgrade my office computer to facilitate work on The Encyclopedia of Philosophy, Second Edition.

2001 - $100,000 from private donor and the Ohio University Office for Research to support the research of philosophy faculty.

1994 to 2001 - $175,000 from private donors and Ohio University to support special lectureships in the Philosophy Department.

1991 - $500 from the National Endowment for the Humanities to serve as project adviser for a Younger Scholars Award. Younger Scholar: Elliot Ratzman, Senior at Ohio University. Project title: Liberation Theology: Christian and Jewish.

1990 - $5,000 from the 1804 Endowment to plan and teach experimentally megasections of introductory philosophy during AY 1990-91 (with John Bender, Algis Mickunas, Robert Trevas and Arthur Zucker).

1989 - $3,000 from the Institute for Applied and Professional Ethics and the Ohio University Provost's Office to support research project: "A Staged-Information Simulated-Decision Model for Enhancing Ethical Reasoning Skills of Medical Decision-Makers" (with Arthur Zucker).

1989 - $95,900 per year for six years with annual inflationary increment from the Ohio Board of Regents to support the Program in Applied and Professional Ethics (with Ralph Izard, John Stinson and Arthur Zucker).

1989 - $4,000 from the GTE Foundation to establish the GTE Lecture Series on "Medical Technology and Moral Puzzles" (with Arthur Zucker).

1986 - $55,000 from the Ohio Board of Regents to support content/pedagogy enhancement for K-12 teachers in southeastern Ohio (with R. Mitias and I. Ungar).

1981 - $190,000 from The National Endowment for the Humanities to conduct a series of Summer Curriculum Seminars at Ohio University to generate new General Education courses. Project Director (with W. Ruchti, N. Dinos and J. Rovner).

1979-80 - $600 from the Ohio University Experimental Fund to support experimental course, "Philosophy and Technology."

1978-79 - $20,000 from The National Endowment for the Humanities to generate curriculum interfacing philosophy and technology.

1976-77 - $25,000 from The National Endowment for the Humanities to become a Fellow at the National Humanities Institute at the University of Chicago.

1975 - $5,120 from The Ohio Program in the Humanities to develop the Ohio University Conference on Humanness.

1973-74 - $1,250 from the Ohio University Undergraduate Teaching Fund to develop an experimental course on ethics.

1972-73 - $2,250 from the Ohio University Undergraduate Teaching Fund for development of teacher self-analysis.

1971 - $1,875 from the Ohio University Research Committee for study of Marxist-Christian Dialogue.

1970 - $600 from Ohio University Research Institute for development and presentation of paper at Korcula Institute, Yugoslavia.

Listed in Marquis Who's Who in America every year since 1988.

Received from Who’s Who the “Albert Nelson Marquis Lifetime Achievement Award” in 2018.

Language Proficiency in addition to English for Scholarly Work

Portrayed Protestant minister in the re-enactment of George Washington’s Funeral on the 200th anniversary of his death, Mount Vernon, Virginia, December 18, 1999, televised

Chaired a panel to identify and award for excellence achieved, six humanities projects out of the multitude sponsored by the Ohio Humanities Council during the 15 years since the creation of the Council, March 1987.

Chaired the 1985 Fellowship Review Panel for the Indiana Committee for the Humanities, Indianapolis, February, 1985, to award fellowships to six Indiana scholars in the humanities.

Referee for Philosophy Research Archives, 1983--.University of Michigan at Dearborn, April 1980. Invited evaluator of an experimental three-course humanities program funded by the National Endowment for the Humanities.

Assistant Director of study tour of the major archaeological sites in Israel, January 1979.

Invited observer at the deliberations of the Social Ethics Committee of the Baptist World Alliance in Baden, Austria, July-August, 1969.

Leadership Opportunities Outside the Academy

Member of the Board of Governors of The Club at Seabrook Island, South Carolina (a multi-million dollar resort and conference business), 2002 – 2005.

Vice President and Secretary of the Board of Directors of the Atrium Villas Regime at Seabrook Island, South Carolina, 2000 – 2011.