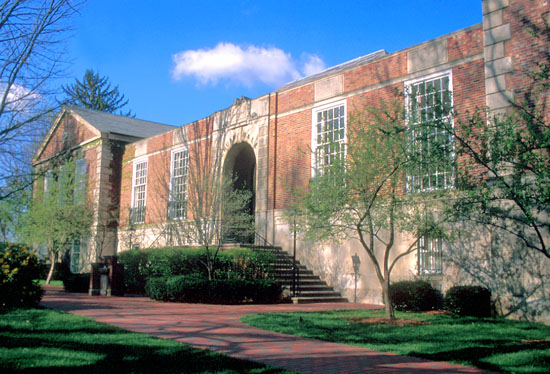 #9
on the campus map

Chubb Hall is located in the College Green, coordinates H-3 on the campus map. It is marked as #9 on the map.

Chubb Library was built in 1930, when the university had begun to outgrow Carnegie Library, and opened in 1931. The new library cost $350,000 and was designed to hold about 75,000 volumes. The fountain in front of Chubb Library was a popular meeting place where, according to the 1931 Athena  yearbook, "both students and pigeons drink daily." When Alden Library was built in 1969, the building was renovated for use as office space and its name changed to Chubb Hall. The marble-like pattern on the concrete was left by ivy, which had to be removed to preserve the building.

Chubb Hall was named in honor of Edwin Watts Chubb. He was educated at Schuylkill Academy and Lafayette College, receiving an honorary degree from Albright College. He was a professor of English here at Ohio University. In 1907, he was made dean of the College of Liberal Arts, now the College of Arts and Sciences. He was acting president for one year in 1920 when President Ellis died and again in 1934 when President Bryan died. He was known as an author and lecturer.