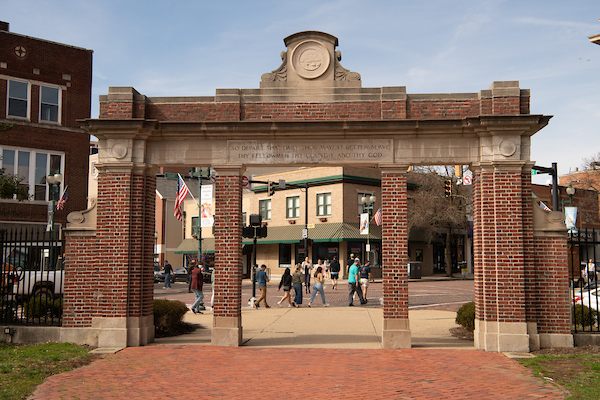 The Alumni Gateway is located at the intersection of Court and Union Streets (between coordinates G-3 and H-3 on the campus map). Court Street is the main street uptown; the buildings located there include the Courthouse, banks, theater, church, several stores, and many eating places. The corner of Court and Union Streets is where Ohio University and the City of Athens meet.

The Alumni Gateway greets all who enter the campus with an inscription that reads:
So enter that daily thou mayest grow in knowledge wisdom and love.

The inscription over the Alumni Gateway for those departing the campus reads:
So depart that daily thou mayest better serve thy fellowmen thy country and thy God.

The Alumni Gateway was a gift of the Class of 1915 to mark the 100th anniversary of the first graduating class of Ohio University, the first graduation in the old Northwest Territory. The quotations on the gate were taken from a Latin inscription found over the main portal of the University of Padua, Italy.

The marker seen at the left of the photo, above, was placed in 2003 by the Ohio Bicentennial Commission, the International Paper Company Foundation, and the Ohio Historical Society. The text reads:

"Religion, morality, and knowledge, being necessary to good government and the happiness of mankind, school and the means of education shall forever be encouraged." -- The Ohio Ordinance of 1787, Article III.

"Be it enacted by the General Assembly of the State of Ohio, that there shall be an University instituted and established in the town of Athens ... by the name and style of the Ohio University." -- Land Laws for Ohio, 1804.

Thomas Ewing and John Hunter, Class of 1815, earned the first college degrees in the Northwest Territory.

Cutler Hall, built between 1816-1819 is the oldest building dedicated to higher education in the Northwest Territory and is on the National Register of Historic Places.