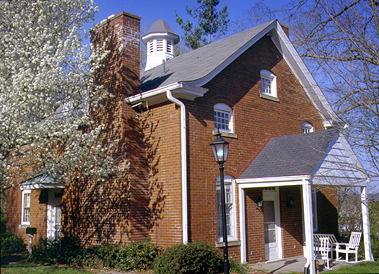 Claire Oates Ping Cottage is located in the College Green, coordinates I-4 on the campus map. It is marked as #17 on the map.

Claire Oates Ping Cottage is used as a facility for special guests of the president.

Claire Oates Ping was born and raised in Kerrville, Tenn. She graduated from Millington, Tenn. High School and later attended Rhodes College where she received a degree in economics. She received an Honorary Alumna Award from Ohio University in 1979. She was the "First Lady" of Ohio University from 1974 through 1994, while her husband, Charles J. Ping was President. A gracious hostess, she welcomed more than 45,000 guests to the president's home.

She was very active in the Ohio University Women's Club, Trisolini Gallery, Visitor's Center, Konneker Alumni Center, and international student organizations. She was a board member of the Ohio University Museum of American Art. She was responsible restoring the Carriage House Guest House which provides living accommodations for university guests. In 1994, the cottage was renamed in her honor and is now known as the "Claire Oates Ping Cottage". She redecorated the president's home, and helped to improve the Baker University Center Dining Room.

Being very active in the community, she founded the Athens Foundation, Inc., a non-profit foundation dedicated to improving life in the Athens area, and Community Scope, a community service organization. She was a board member of Bank One. Other community projects were downtown redevelopment, the dairy barn, and Christmas lighting. Saving the Ridges, the former Athens Mental Health Center, and its land provided her with the most satisfaction. The Ridges and surrounding land is now owned by Ohio University.