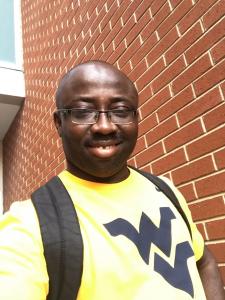 Michael is pursuing his doctoral study researching the role of media in the cultural assimilation of immigrants, especially among Africans in the diaspora. He also has research interests in happenings on the African continent.

He teaches multiplatform reporting, which he thoroughly enjoys as he gets to impart his knowledge as a reporter, news writer and editor to his students, under the masterful guidance of course Professor Bill Reader.

The first three years after his undergraduate education, Michael worked as an instructor in two high schools in Ghana’s Central Region, teaching agriculture and biology. Michael went on to pursue a master’s program in tropical forestry and management at the Dresden University of Technology in Dresden, Germany, from 2011 to 2013. For his master’s thesis he investigated human-elephant conflict at the fringes of Ghana’s foremost national park, the Kakum Conservation Area.

Upon his return home from Europe in late 2013, Michael switched careers, deciding to become a journalist to explore his passion for writing and current affairs. After a year of blogging, was hired as an online journalist at the Class Media Group in Accra, Ghana, writing and editing stories for the websites of its stations, Class FM and Accra FM, and later became assistant editor.

In the fall of 2017, Michael came to the U.S. to pursue another master’s program in journalism at West Virginia University. While there, he assisted with the teaching of introductory journalism courses and also worked as a research assistant. His thesis focused on comparing homeland and ethnic media consumption patterns among Ghanaians living in the Greater Washington, D.C. area.

Michael plans to spend his first few years after school teaching and honing his research abilities. He hopes to devote most of his working life documenting African migrant stories to bring them to the attention of the world, as he sees a dearth of information on migrants from his mother continent currently. In his later years, he wishes to work with multinational organizations like the United Nations in Africa, especially carrying out research and teaching a new generation of African media professionals.

Michael has only one hobby, soccer – from his living room armchair. He says it is his only entertainment, otherwise he is reading news on his phone, writing an article, or studying.