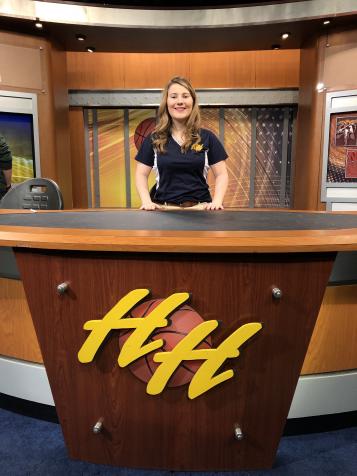 A. I am the Executive Producer of “SportsBeat”, a weekly radio talk show highlighting local high school football and Ohio Athletics on WOUB 1340. I am also a reporter for Gridiron Glory and Hardwood Heroes.

Q. How did you get involved with WOUB?

A. I got involved with WOUB my freshman year after being exposed to it through the High School Journalism Workshop put on by the university. I knew then WOUB was the organization for me.

Q. How much did you know going in? Specifically about the tasks you perform there? Did you have previous broadcast experience before starting at WOUB?

A. I had a lot of previous broadcast experience and knowledge before starting at WOUB. This helped me have a solid foundation to build on future skills learned through WOUB, including video editing and on-air presentation skills.

Q. What is your time commitment (hours per week)?

A. My time commitment for WOUB is about 8 hours a week. This includes show prep for SportsBeat and including coverage for the various sports shows produced.

Q. What’s skills have you developed or improved?

A. The skills I have developed is becoming stronger at using Adobe Premier and various Adobe products, a personality on air without being too informal, and improved my reporting skills by asking meaningful questions.

Q. What advice would you give to students who are interested in working at WOUB?

A. As Allison Hunter says, do everything, but not at once. Don’t be afraid to jump from one place to the next and be curious about what is offered under WOUB. Want to work with Gridiron? Go for it. Find out sports really isn’t your thing? Go to Pit Camp for Newswatch. Like podcasting more than production? Go explore with the OUtlet.