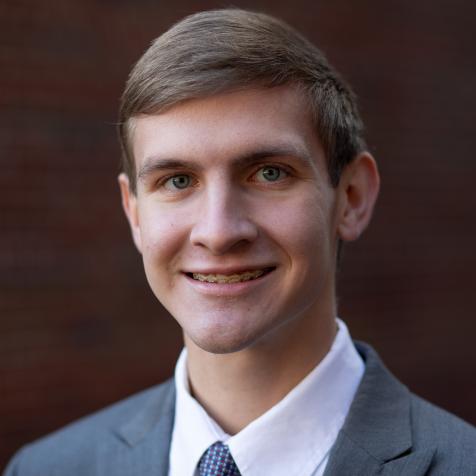 The WOUB Center for Public Media is home to public television and radio stations and production services. As a non-academic unit of the Scripps College of Communication, WOUB hires and trains OHIO students, who gain all kinds of professional experience right next door to Schoonover! We're featuring some of those students in this "WOUB Student Experience" series. For current students hoping to get involved, WOUB will host an information session January 21 at 5 p.m. in RTV Studio A (on the third floor).

A: At WOUB, I am part of the paid staff that covers Ohio University athletics for Bobcat Sports Showcase.  So far this year, I have reported on sports including football, volleyball, field hockey and women's basketball.  Additionally, I anchor sports on NewsWatch every Tuesday night at 6:30 p.m.  I am also part of WOUB's high school football and basketball shows -- Gridiron Glory and Hardwood Heroes.

Q: How did you get involved with WOUB?

A: I met the current WOUB sports director, Thomas Garverick, at the high school journalism workshop in 2017.  Thomas and I stayed in touch throughout the next few years and he eventually got me to join the sports department at WOUB.

Q: How much did you know going in? Specifically, about the tasks you perform there? Did you have previous broadcast experience before starting at WOUB?

A: I knew a little bit about WOUB coming in.  I found out about the different opportunities at Experience Scripps Day during my junior year of high school.  Before joining WOUB as a freshman, I had a lot of broadcasting and video production experience in high school.  I did play by play for my high school's football and basketball teams, I was part of the school's morning announcements broadcast and I took video production courses.  I definitely came into WOUB with a lot of prior knowledge, but I have learned so much more in just a year and a half!

Q: What is your time commitment (hours per week)?

A: Since I am part of the paid staff for OU sports coverage, I usually put in 20-25 hours a week, which includes game coverage, press conferences/media availability, sports anchoring and other tasks.

Q: What're the skills have you developed or improved?

Q: What advice would you give to students who are interested in working at WOUB?

A: The biggest advice I could give to students interested in WOUB is to get involved as early as you can!  There are so many options for students at WOUB, no matter their interests.  Unlike other well-known journalism schools, students can get experience at Ohio University and WOUB from the start of their freshman year!  Also, don't be afraid to get feedback and critiques from upperclassmen and professionals.  It is only going to make you better at the end!