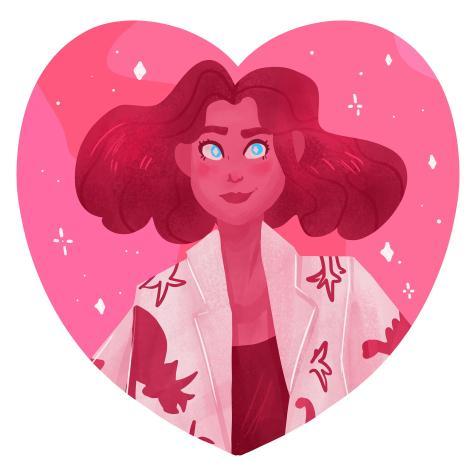 Madeline Priebe has always had a passion for illustration. She has been doing digital art and illustration since middle school and said she truly began pushing herself when she reached high school. Priebe’s love stems from animated films, especially those from Walt Disney Studios.

After touring college campuses, Priebe decided on Ohio University because she could get a degree in a creative field as well as a second major.

"OU was one of the first campuses where I walked onsite and felt right at home," she said.

Priebe graduated with degrees in both games and animation and communication studies, and with a certificate in social media. She said the School of Media Arts and Studies (MDIA) was “great for providing experience, which is the most important thing you need if you want to develop hard skills and continue in the creative field after school.”

One of Priebe’s most valuable experiences was MDIA's OHIO-in-LA program. She spent a summer with 20 other students creating a short film, taking media classes, touring studios, and interning in Hollywood, an experience that she said has boosted her career.

Today, Priebe works at Epic Games as a motion graphics assistant. She attributes her hiring to a “strong portfolio that showed my motion graphics work” and to showing her positive attitude during the interviewing process. Preibe said she has loved her time with Epic Games. She works with the video team in post-production. She describes her teammates as “fun to talk to and extremely helpful.” Despite having only worked there for about six months, she said she feels like she has earned years’ worth of experience.

Priebe also runs an Etsy shop, Theartofmadeline, where she sells prints of her original illustrations. More recently, she launched a Kickstarter for an oracle card deck she designed and illustrated. Charming Cryptids Oracle Deck is a supernatural-themed deck featuring bold colors and delightful cryptids.

Priebe said she hopes to continue working at Epic Games after her contract expires. She said she is also thrilled about the support and interest the Charming Cryptids Oracle Deck project has received, and that she looks forward to more post-graduation adventures and opportunities to come.