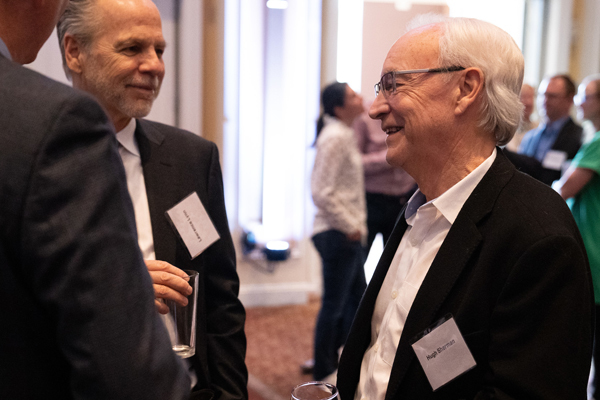 Students, faculty and staff who took steps to move their discoveries to commercialized outcomes for the benefit of society were recognized at Ohio University’s annual Inventors Dinner.

Also at the April 7 event, alumni and faculty selected for the prestigious Konneker Medal for Commercialization and Entrepreneurship were recognized by the University for their achievements.

"Ohio University has at the core of its mission the education of students and the creation of knowledge. We’re very pleased to have the opportunity to recognize a group of our researchers who are actively advancing the frontiers of knowledge and taking steps to ensure that their discoveries will move out of the University to benefit society more broadly," said Joe Shields, vice president for research and creative activity and dean of the Graduate College.

OHIO President Hugh Sherman noted that the work of faculty and alumni around the world is changing lives and that their creativity and innovation benefits the public good.

"Our students, faculty and staff who engage in research and take the steps to enable commercialization of their discoveries are the drivers of this creativity. And it is astounding to to see how many of them have achieved success as entrepreneurs," Sherman said.

"The first step in determining whether to file for a patent to protect intellectual property is working with faculty and staff to learn about new innovations emerging from their work," said Bob Silva, director of the Technology Transfer Office. He noted that his office reviewed 38 invention disclosure reports submitted by 46 inventors in 2020 and 2021. During that time, OHIO filed 30 U.S. patent applications and received 12 U.S. patents for the work of 16 inventors.

Guy Riefler, Ph.D., professor of civil engineering in the Russ College of Engineering and Technology, was awarded a patent for "Active Treatment of Mining Wastewater for Pigment Production." This patent relates to systems and methods for actively treating mining wastewater, such as acid mine drainage, using a mixed culture of iron-oxidizing bacteria, in a manner that results in both remediation of the water and the production of a useful end product, including iron-containing usable pigments.

Stephen Bergmeier, Ph.D., professor and chair of chemistry and biochemistry in the College of Arts and Sciences, and Xiaozhuo Chen, Ph.D., associate professor of biomedical sciences in the Heritage College of Osteopathic Medicine and an Edison Biotechnology Institute researcher, were awarded a patent for "Compositions and Methods for Glucose Transport Inhibition." This patent discloses novel anti-cancer compounds that can suppress tumor growth and new methods for studying glucose deprivation in cancer research.

Muhammad Ali, Ph.D., Russ College professor of mechanical engineering, and graduate student Sean Jenson received a patent for "Fluid-filled Safety Barriers for Guard Rails." This patent discloses a force-absorbing barrier consisting of flexible, fluid-filled chambers to absorb energy from the impact of a motor vehicle, preventing the vehicle from impacting the terminal of a guardrail.

John Staser, Ph.D., associate professor of chemical and biomolecular engineering was awarded a patent for "Electrochemical Conversion of Lignin to Industrial Chemicals." This patent describes a process using a binary transition metal catalyst to convert a natural organic polymer to a variety of industrial products.

Bergmeier and Chen also teamed up in 2020 on a patent, "Glucose Transport Inhibitors and Methods of Using Same." This patent describes compounds that inhibit or reduce glucose transport to treat cancer.

Bergmeier additionally partnered with Douglas Goetz, Ph.D., professor of chemical and biomolecular engineering, and Mark McMills, Ph.D., associate professor of chemistry and biochemistry, for a patent on "Imidazole and Thiazole Compositions for Modifying Biological Signaling." This patent describes compounds that may be used to treat various pathologies such as breast cancer, sepsis, colitis, Alzheimer’s Disease, diabetes or fatty liver disease.

Ken Walsh, Ph.D., associate professor of electrical engineering and computer science, was awarded two patents. "Passive Variable Negative Stiffness Device and Methods of Use Thereof" relates to a device that is capable of force-displacement that may be used to mitigate the effects of seismic events, vibrations or other movement on structures. "Resetting Semi-Passive Stiffness Damper, Triggering Assembly, and Method of Damping" describes a stiffness damper device and uses for such a device for structural control and other movement damping applications.

Chris Bartone, professor of electrical engineering and computer science, and alumnus Joel Schopis were awarded a patent for "Single-Element Patch Antenna with Pattern Control." This patent relates to a single element antenna with the ability to have pattern control.

Three recipients of the Konneker Medal for Commercialization and Entrepreneurship were recognized in person at the Inventors Dinner.

The Ohio University Foundation established the Konneker Medal to recognize current and former faculty members or students who have demonstrated excellence in innovation, invention, commercialization, and entrepreneurship. The award is named in honor of the late Wilfred Konneker, an OHIO alumnus with a distinguished record in research and entrepreneurship who earned a B.S. in Chemistry and an M.S. in Physics from the College of Arts and Sciences.

Lawrence Lynn, selected in 2020 for the Konneker Medal, is a former clinical faculty member in the Heritage College of Osteopathic Medicine. Lynn is a prolific inventor of successful medical devices and patient monitoring systems and has filed more than 100 patents for his work. Lynn is founder and president of Lyntek Medical Technologies Inc., based in Columbus, Ohio, which is focused on developing new and improved medical technologies.

Alan Schaaf, also selected for Konneker Medal recognition in 2020, is a 2010 OHIO graduate with a bachelor’s degree in computer science from the Russ College of Engineering and Technology. While still a student, Schaaf developed, founded and launched imgur.com, an online image hosting and sharing site. Imgur has achieved enormous popularity, reaching 300 million users across the globe, making it one of the top 50 internet properties in the United States and top 100 worldwide.

Steve Snyder, selected for the Konneker Medal in 2021, received a bachelor’s degree in accounting from OHIO’s College of Business. Snyder subsequently founded the company 21st Century HealthCare, based in Tempe, Arizona. The company has gone on to become one of the world’s largest manufacturers of dietary supplements, with more than 500 employees producing 5 billion doses annually.