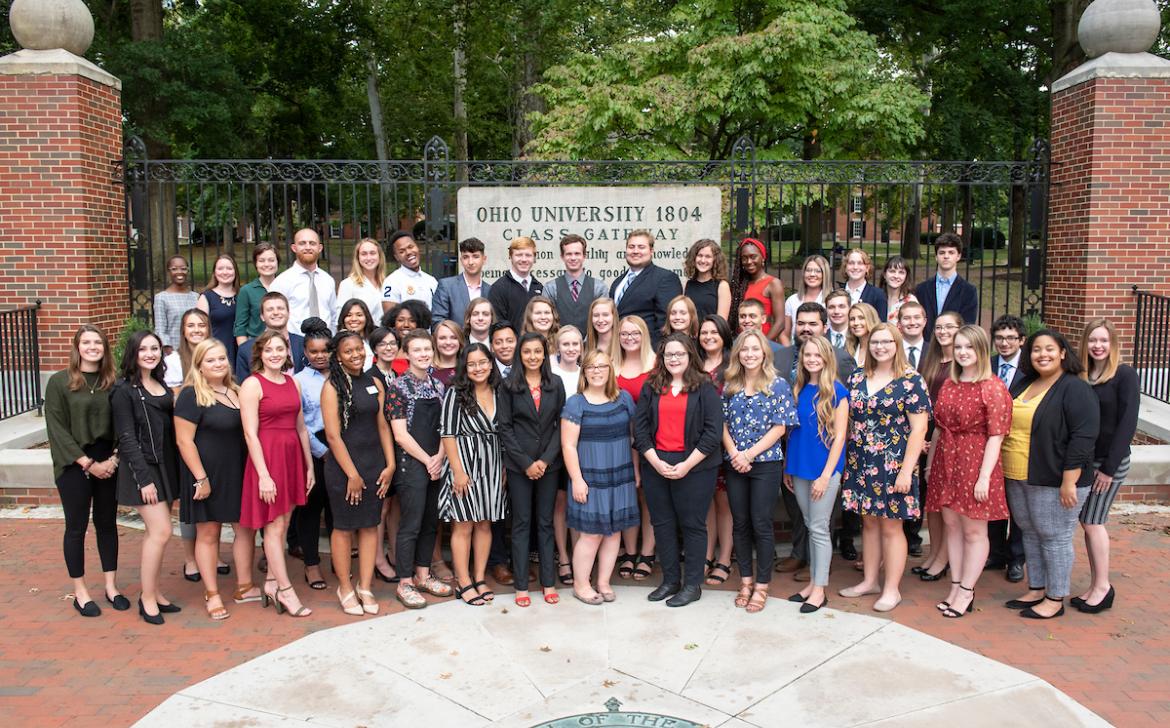 We are excited to introduce the Class of 2023!

(Biographies provided by the recipients)

Jamirah is a dual enrollment student at Cuyahoga Community College and will earn an Associate Degree in Science this summer. Jamirah earned her State Tested Nursing Assistant license and is active in Phi Theta Kappa. At her high school, she was a member of National Honor Society and the tennis team. Jamirah also volunteered at her local community garden. Jamirah is excited to pursue new challenges as a chemistry and physics major at OHIO. Jamirah is the daughter of Jamilah Abdul-Haqq.

Sophia was recognized as a National Hispanic Scholar. She was involved in a wide variety of
organizations at Mercy McAuley, including National Honor Society, Women Lead Engineering, orchestra, theater costume crew, and the After School Work Program. Sophia plans to major in chemical engineering at OHIO. As an advocate for inclusion, Sophia looks forward to working with OHIO’s Office of Multicultural Student Access and Retention and other minority student organizations to reach out to underrepresented minorities. Sophia is the daughter of Diane and Julio Almanza.

Mone’t has acted in a multitude of plays, writing and acting for Sankofa as part of the Black History Month showcase, and writing and directing a New Stages performance, a co-curricular production at Shaker Heights High Schoool. Mone’t was also involved in organizations such as cheerleading, Student Group on Race Relations, and the Minority Achievement Committee. Outside of school, Mone’t spent two years performing and leading discussions with Know Abuse, a teen dating violence prevention program. As a film major at OHIO, Mone’t is excited to delve deeper into the art of film, develop her creative style, and explore the intersection of her passions for film and interpersonal communication. Mone’t is the daughter of Deborale and Kirk Phillips.

As president of Southern High School’s student council, Marissa lead a food drive that brought in over $1,000 and 2,000 cans of food for the local food pantry. Marissa was captain of the Science Olympiad Team and was involved in 4-H. She played varsity volleyball and received the Todd Judy Ford Student Athlete of the Week Award and an all-conference honor. Marissa plans to major in biological sciences and looks forward to traveling and participating in undergraduate research. Marissa is the daughter of Paula and Peter Brooker.

Mihajlo volunteers with the Red Cross and helped to organize a concert to benefit families in need as part of the Red Cross Promoting Human Values program. Mihajlo participated in the World Scholar’s Cup, a global academic program celebrating learning and leadership. Mihajlo plans to major in computer science at OHIO and looks forward to exploring his interest in entrepreneurship and participating in the OHIO Honors Program. Mihajlo is the son of Katerina Choneva and Spaso Chonev.

As an Eagle Scout in Troop 212, Robert worked to restore grave yard at Key Bethel Presbyterian Church. He was a delegate for Buckeye Boys State, a member of the National Honor Society and salutatorian of his class. Robert was a recipient of the Marine Corps League Good Citizenship Award and the Challenge Program Incorporated XTO Energy STEM Award. An avid runner and member of the Cross Country Team, Robert was honored with the OVAC All-Conference Academic Award for four consecutive year. He is excited to pursue new academic challenges as a chemistry major at OHIO. Robert is the son of Tina and Robert Hicks IV.

An actor and performer since the age of six, Adriana has graced the stage at venues including Lincoln Center, Playhouse Square, 54 Below, and The Beck Center for the Arts. She is the founder of Grant a Guitar, a nonprofit organization dedicated to encouraging music literacy and appreciation. Adriana’s passion for the arts is matched by her enthusiasm for computer programming and coding, which led her to travel to Washington D.C. to lobby for computer science education. Adriana plans to pursue dual degrees in musical theater and computer science at OHIO, and she looks forward to exploring new interests and perspectives through travel and community engagement experiences. Adriana is the daughter of Dawn and Sebastian Holst.

Emily served as vice president of the McClain National Honor Society, captain of the McClain Tigerettes, and media relations specialist for student council. Emily was also active in her community’s chapter of Big Brothers Big Sisters and served as president of the Ross County Jr. Fair Board. As a communication sciences and disorders major at OHIO, Emily looks forward to studying American Sign Language and contributing to the ASL Club. Emily is the daughter of Amanda and Barry Jones.

As the president of the president of her high school’s Interalliance Chapter, Simar helped organize Tech Olympics, the largest teen tech conference in North America. She also participated as a delegate in Buckeye Girls State and was technology chair for Youth in Philanthropy. Simar has interned with GE Aviation and plans to work in a Business Analyst role there this summer. Simar received the National Center for Women & Information Technology (NCWIT) Award for Aspirations in Computing in 2018 and 2019. As a business analytics major at OHIO, Simar hopes to join the Schey Sales Center and use her trilingual fluency to explore opportunities in international affairs. She looks forward to making life-long connections with professors, alumni, and fellow students. Simar is the daughter of Sukhraj Kaur and Jangvir Singh.

As vice president of her school’s Diversity Club, Sarah helped to create opportunities for dialogue with her peers and helped to plan events such as Pickerington’s Black History Month production, for which she served as creative director and writer. Sarah also participated in the Ohio Youth-Led Prevention Network to engage youth across Ohio to prevent drug use and addition. She was involved in National Society of Black Engineers and served as vice president of the Fashion Club. As a philosophy major at OHIO, Sarah is excited to call herself a Bobcat and contribute to social justice initiatives on campus. Sarah is the daughter of Titi and Victor Ladipo.

Reality Check New York named Oliva 2019 Youth Advocate of the Year for her work to raise awareness about the negative impact of tobacco use. She participated in the Olean Area Youth Court, a youth-driven alternative to the traditional juvenile justice system, and was a top-ranked player on the Olean High School tennis team, which was undefeated in 2018-19. Olivia plans to major in psychology and looks forward to expanding her comfort zone through the many opportunities available at OHIO. Olivia is the daughter of Terri Gilbert and Mark Lang.

Faith served as field commander for the Federal Hocking Marching Lancers and class treasurer, and was involved in the Art Club. Faith helped plan her high school’s annual Community Service Day and participated in the Athens County Global Dialogues Community Panel. She is proud of the work she has done to uphold her school’s value of community service, allowing her to learn more about herself and the local community. In addition to studying applied nutrition, Faith looks forward to learning about perspectives and worldviews different from her own and joining musical ensembles at OHIO. Faith is the daughter of Lavonna and Jack Laughlin.

Emily will graduate as class valedictorian and lettered all four years in varsity tennis. She was awarded the Franklin B. Walter All Scholastic Award, which recognizes an outstanding senior from each county in the state of Ohio. She cannot wait to begin her academic journey as a chemical engineering major at OHIO. Outside of the classroom, she looks forward to being involved in math and science activities, intramural tennis, and the Intersectional Feminist Alliance. Emily is the daughter of Ervin and Chrissy McCarty.

Jessa was president of Chillicothe’s National Honor Society, Multicultural Club, and PEER Tutoring program. She was also involved in Big Brothers Big Sisters. Jessa’s athletic honors include League Player of the Year, First-Team All-League, and First-Team All-District for Division 1 and 2 in volleyball. In addition to studying Health Services Administration at OHIO, Jessa looks forward to exploring community engagement opportunities and staying active in volleyball. Jessa is the daughter of Courtney Maxwell.

In her role as president of Students for Advancement, Cassidy facilitated fundraisers and volunteer outreach to increase diversity and economic accessibility of Saint Ursula Academy. Cassidy also participated in her school’s Peer Advisory program and the Ohio Junior Classical League. She earned a Class A superior ranking for piano performance from the Ohio Music Education Association. As a mechanical engineering major at OHIO, Cassidy looks forward to joining the Rocket Team and orchestra. Cassidy is the daughter of Jessica and Andrew Serger.

Madison served as the president of Shaker’s Public Speaking Club, Varsity Track and Field hurdle captain, and vice president of her class. Madison maintained High Honor Roll all four years of high school while taking Honors, AP and IB coursework. She played violin in both String and Chamber Orchestra, touring in Greece in 2018. Since 2015, Madison has served as an advanced cohort member with the IndeedWeCode Computer Coding Camp and spent last summer working at NASA as a web developer and systems engineer. As a biochemistry major at OHIO, Madison is eager to explore her interests in medicine and technology and aspires to help reduce health disparities for families and children. Madison is the daughter of Tawana Duncan-Wilson and Myron Wilson, Jr.