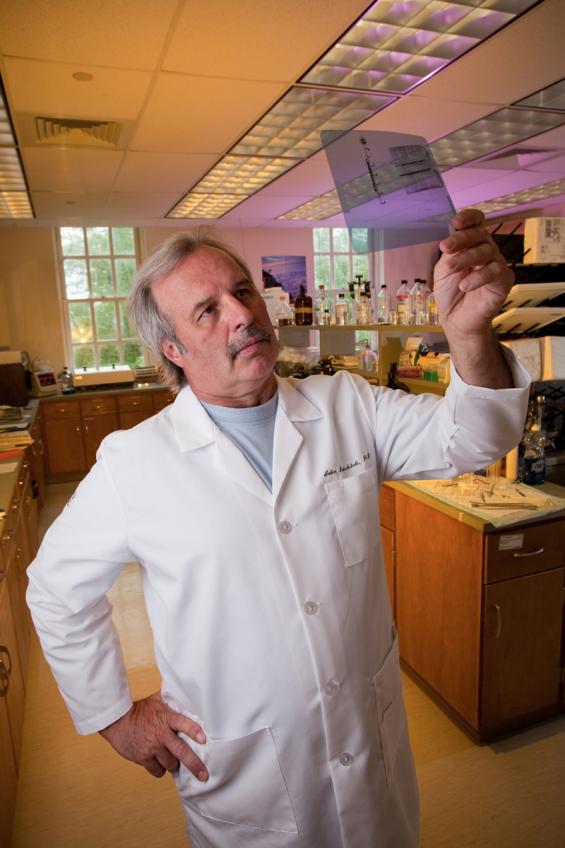 Dr. Kopchick is an expert on growth hormone (GH). With over 20 years of research experience on human and animal GH, Kopchick and colleagues have focused on the molecular biology of GH in relation to growth, obesity, insulin resistance, diabetes and aging.

Kopchick's work is also commercially successful. In 1987, he and a graduate student discovered an hGH receptor antagonist, which blocks the normal action of the hormone. After 15 years of continuous research, development and clinical trials, the U.S. Food and Drug Administration approved the compound that Kopchick discovered as a drug.

The major pharmaceutical company, Pfizer, then purchased the hGH receptor antagonist technology and has commercially marketed it under the name SOMAVERT (Pegvisomant for injection). The drug is used as a treatment for acromegaly, a growth disorder marked by excessive levels of hGH that results in enlargement of the hands and feet, facial disfiguration and multiple organ disorders. If left untreated, premature death can ensue. About 40,000 individuals are diagnosed with acromegaly worldwide.

In the years since Pfizer's commercial launch of SOMAVERT, Ohio University has received more than $75 million in royalty income from the license.

Additionally, in 2007, Kopchick, along with colleague Dr. Jens Otto Jorgensen, received a $482,000 grant from the World Anti-Doping Agency to find a marker that would make testing for hGH as a performance-enhancing drug possible. The hormone is alleged to be one of the more common performance-enhancing drugs used by athletes as it is virtually undetectable. Currently, there is no convenient blood or urine biomarker test that will detect hGH doping.

Kopchick and his colleagues are conducting studies to find biomarkers that will make testing more accurate, sensitive and reliable. This research hopefully will result in the ability to determine just how many professional athletes are using hGH as a performance-enhancing drug.

Dr. Kopchick participates in  the Ohio University Collaborative on Aging, which brings together researchers, educators, service providers and students with aging-related interests. The University-wide interdisciplinary network focuses on improving the lives of older adults and optimizing quality of life across the lifespan, especially in underserved populations.

Kopchick is an expert on growth hormone, autoimmune disease and SOMAVERT. He discovered an hGH receptor antagonist, which blocks the normal action of the hormone, and was then marketed under SOMAVERT. The drug treats acromegaly.