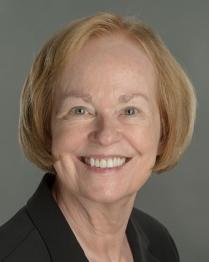 Paying it forward gives tribute to others and enhances well-being. Over her tenure at OU, Mary has paid it forward by leading teaching and learning continuous teams, developing numerous faculty training sessions – from teaching portfolio development to exploring the brain and learning, for example. After receiving certification as a Master Teacher, Mary coached colleagues to develop ways for improving teaching which resulted in higher teaching evaluations. Colleagues have benefited from Mary’s help in developing courses and modules for their undergraduate courses, MBA presentations, and executive training modules, as well as research.

Often young faculty face a labyrinth of paths and possibilities. Sometimes it’s difficult to know how to navigate strategically. Because of her own professional struggles, Mary became stronger and more capable to guide younger colleagues as they move through the labyrinth and gain a firmer foundation from which to grow in academia. Research supports that helping others enhances personal happiness. Seeing young colleagues succeed truly makes Mary happy! Mentoring others is her tribute to those who unselfishly mentored her. 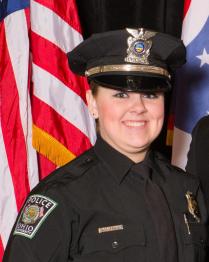 Detective VanBibber was hired by the Ohio University Police Department in 2012 into the position of a patrol officer. She had the chance to serve on all three shifts as a patrol officer for nearly two years in which time she gained a lot of experience.  In 2014, she applied for and was assigned to her current role as a plain clothes detective in the Criminal Investigations Unit. She was and still is very grateful that she was afforded this opportunity as investigations is where her passion truly lies. In this role she investigates all types of crimes including sexual assault, financial crimes, and property crimes.  As part of her assignment, she also manages OUPD’s evidence room.

Prior to her employment with OUPD, she worked as a corrections officer at the Southeastern Ohio Regional Jail.

She received her Associate of Applied Science in Criminal Justice- Law Enforcement from Hocking Technical College.

Off duty, she loves spending time with her husband, Josh, and their two-year-old son Knox. 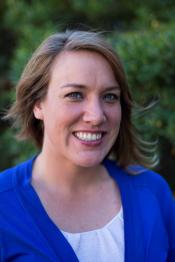 Jenn Bennett has over 15 years of experience in fitness and well-being.  She has received her degrees, with concentration in Exercise Physiology, a BS from Ohio University ’05 and a MS from the University of Tennessee ‘08. She worked at one of the fastest growing YMCA in Tacoma Washington specializing in active seniors and health seekers behavior change programming.  At Cornell University, Jenn worked with their wellness team to design campus-wide employee challenges, life coaching, and manage Cornell’s Healthy Aging Classes for retirees.  Currently, Director of WellWorks, Ohio University’s employee wellness programming and two facilities in Athens, OH her team enhances wellness experiences for members and employees while providing an experiential learning opportunity for students.  Jenn is a facilitator in Resilience & Thriving and a Nationally Board Certified – Health and Wellness Coach.  Her passion is connecting with others and find their inner awesomeness. 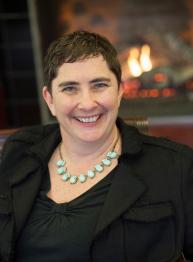 Patti McSteen has worked in the Office of the Dean of Students for 22 years.  As associate dean of students and director of the Margaret Boyd Scholars Program, Patti has served the students at Ohio University in several capacities.

Patti received her Bachelor of Fine Arts in Art Therapy, a Master of Education in Student Personnel and Doctor of Philosophy in Counselor Education, all from Ohio University.   She began her career as assistant dean of students in 1997, and became associate dean in 2004.

Patti leads the behavioral intervention and student crisis response for the division of student affairs, providing support to students experiencing crisis.  She works closely with the Survivor Advocacy Program and Counseling & Psychological Services.   In addition, Patti is the director of the Margaret Boyd Scholars Program, an academic enrichment program that inspires undergraduate women to become engaged, confident and connected leaders at Ohio University and beyond.   Through her work with the Margaret Boyd Scholars, Patti has contributed to the improvement of campus culture for women students at Ohio University. 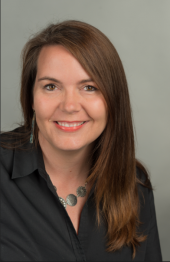 Shawna Bolin is an alumna of Ohio University and serves as the Associate Vice President for University Planning. Ms. Bolin leads several organizational areas including Campus Planning, Space Planning & Programming, Capital Planning, and Transportation and Parking.  In this role, Ms. Bolin applies her passion for the University’s academic mission by providing informed planning through collaborative engagement. She endeavors to ensure that planning issues are considered holistically to support the core values of the institution, not only utilizing the already wonderful aspects of the Ohio University Community, but also by creating innovative solutions that foster the Bobcat spirit. Prior to Ohio University, she was a Senior Planner and Designer for Hilferty and Associates, a large-scale interpretive museum consulting firm.  From master planning and visioning, to detailing interactive experiences, this opportunity took her all over the country including to Casper, Wyoming where the National Historic Trails Center was conceived and constructed. Ms. Bolin holds a Bachelor of Arts Degree in Interior Architecture and Planning from Ohio University. 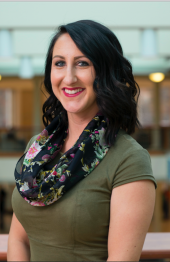 Kimberly Castor was born and raised in the Appalachian region of Ohio. She joined the Division of Student Affairs in June 2016 as Director of the Survivor Advocacy Program. A two-time Ohio University graduate, Castor received her Bachelor of Arts in Social Work with a minor in psychology and her master’s degree in social work. She is licensed with the Ohio Counselor, Social Worker, Marriage and Family Therapist Board as a Licensed Independent Social Worker with a supervision credential and has a wide range of experience in counseling, mental health, advocacy and trauma informed care. Prior to coming to work at Ohio University, Kimberly worked for 5 years at Appalachian Behavioral Healthcare, a state psychiatric hospital here in Athens, Ohio.

As SAP director, Castor has full programmatic responsibility in addressing campus-wide interpersonal violence response. In addition to providing support and information to student survivors, she oversees office staff and collaborations with prevention education efforts on campus. When she began in her position in 2016, she was tasked with rebuilding the Survivor Advocacy Program from the ground up as it has been closed for 8 months. Castor states “Leading this program has been the most rewarding and greatest accomplishment of my life thus far. Because of the work my team and I have done, and continue to do, one of our most vulnerable student populations have a place they can go for support and know that regardless of anything else going on in their life, when they walk through our doors they will be believed, supported, and no longer feel alone.”

Outside of work, you can find Castor spending time with family and friends, enjoying the outdoors and working towards earning her Ph.D. in Higher Education and Student Affairs. She is the proud daughter of two hard-working parents, the aunt of nine beautiful nieces and nephews, and the (dog) mother of a goldendoodle named Chester and a boxer rescue named Roscoe. 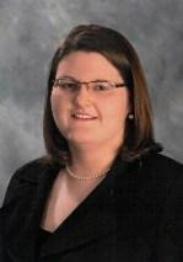 Jessica L. Cook is the daughter of an elementary school principal and a middle school teacher.  Both of her parents were first generation college students and inspiring educators.  They instilled in her a passion for education and a deep love for Appalachia.

Jessica began her legal education at the West Virginia University College of Law in Fall 2008.  In addition to her law degree, Jessica also pursued a Master's degree in Higher Education Administration.  Given her love of the law and its complicated nexus with higher education, Jessica sought out opportunities that would allow her to work in higher education legal affairs, regulation, and compliance.  Jessica interned for the General Counsel of the West Virginia Higher Education Policy Commission; the office of WVU Student Legal Services; and the Contempt Litigation and Compliance Branch of the National Labor Relations Board in Washington, D.C.  In May 2011, Jessica graduated in the top third of her law school class with distinction in Pro Bono Community Service.

In November 2012, Jessica was honored to be asked to serve as the Law Clerk for the Honorable H. L. Kirkpatrick III, Chief Judge of the 10th Judicial Circuit of West Virginia.  As a law clerk, Jessica worked closely with her Judge and the West Virginia Supreme Court of Appeals administrative staff to establish the first juvenile drug court in Raleigh County, West Virginia.

In October 2015, Jessica joined Ohio University Equity and Civil Rights Compliance as the Assistant Director for Civil Rights Compliance.   As part of Jessica's work at OU, she investigates allegations of discrimination/harassment/or sexual misconduct that occurs on campus or that involves OU faculty, staff, students, or visitors. Jessica also conducts training for all new Ohio University employees and various other campus constituencies.  In Fall 2016, she was selected as a participant in the inaugural class of Women Leading Ohio, a program designed to build a professional, leadership network of women at Ohio University.

A native of Cyclone, WV, Jessica currently resides with her husband, Justin, in Albany, OH.  In addition to spending time with her family, Jessica enjoys travel, reading, and spoiling her "furbabies" as much as possible. 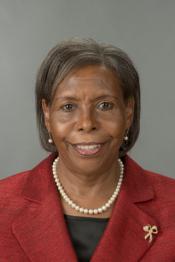 Beatrice's career in the airline Industry spans a period of 37 years. She joined East African Airways Corporation in Nairobi, Kenya in 1967 and relocated to Botswana in 1973 where she continued to pursue her passion in the airline industry by joining Air Botswana. She held numerous senior management positions culminating in her appointment as Acting Chief Executive Officer/Airline Advisor of the National Airline of Botswana. She was the first female to hold this office in the history of the airline.

By the end of 2005 Beatrice brought to a close her extensive career in the airline industry and in the banking industry when in January 2006 she accepted the position of Executive in Residence, Faculty with the College of Business at Ohio University. In addition, Beatrice, through secondment from College of Business, established the African Business Outreach Initiative under the auspices of the nationally acclaimed African Studies Program at Ohio University. In this role she worked closely with the  Department of Development in Columbus, Ohio which is responsible for promoting trade and investment for the State of Ohio internationally. Her involvement culminated with an invitation to accompany a group of American Business Executives representing 20 companies, on an Export Development Trade Mission to South Africa in February 2007.

Another secondment was to the Vice President and Provost's office Dr. Kathy Krendl to establish the first Women's Center at Ohio University in 2007. As the Interim Director, Beatrice was able to mobilize the community to appreciate the importance of keeping women's issues in the forefront.

Since joining Ohio University, Beatrice has been invited as a guest speaker on the topic of "African Business Environment" as well as "Women In Leadership" in more than ten different US Universities and Institutions. A noteworthy contribution through Beatrice's extensive global network has been to invite and coordinate guest speakers for the benefit of the Ohio University community and beyond. Of noteworthy was the 2010 three day visit by the Former President of the Republic of Botswana, His Excellency Festus Mogae – His Lecture topics included "African Leadership and Socio Economic Development" and "Impact of Imports and Direct Foreign Investment on Botswana's Economy."

Beatrice has been instrumental in facilitating partnerships between Ohio University and Botswana. In 2012 she coordinated and led a high powered OU delegation on a "Fact Finding Mission" to Botswana. As a result, over 40 OU Students accompanied by faculty, have done Business and Health related internships in Botswana. Currently Beatrice is an Academic Advisor in the College of Business and has since 2008 – 2016 successfully directed the Junior Executive Business Program for minority students. Beatrice is a great believer in mentoring students and young professionals.