Register now by completing this nomination form. We encourage you to nominate yourself and others. Studies show that women need to be asked multiple times to run for office before they consider it; nominating another to attend Elect Her helps us to encourage women to think about leadership possibilities and to recognize their own potential.

hometown of Detroit. Since then, she has traveled the world training women candidates to run for elected office. She is a Vice President at Deliver Strategies, one of the leading progressive direct mail firms in the country and as the CEO of Rebecca Thompson International, where she focuses on training and coaching women to run for elected office. Previously she served as the Run to Win Director for EMILY’s List, leading the largest candidate recruitment and training program in the organization’s history. Rebecca is a national trainer for a number of organizations including Elect Her, Running Start, the Progressive Campaign Change Committee (PCCC) and others, and was recently named one of the American Association of Political Consultants’ Top 40 Under 40 award recipients.

State Senator Tina Maharath (D-Columbus) is serving her first term in the
Ohio Senate after being elected to the General Assembly in November 2018.
She represents the 3rd Senate District, which encompasses areas of Franklin
County, including Whitehall, Gahanna, Westerville, New Albany, Groveport,
Canal Winchester, the Hilltop and parts of Columbus. She is the first Asian
American woman elected to the Ohio Senate.

A native of Whitehall, Tina chose to dedicate her life to public service at a
young age, inspired by her upbringing as the daughter of refugee parents from
the Southeast Asian nation of Laos. Her father served the U.S. Army under the
Laos Army while her mother worked as a nurse in the Laos Army.

A warrior for underserved, troubled youth, Tina has had to live through a
number of adverse events. She lost her mother and two brothers in a fatal car accident while she was still a young
teen studying in France. Tina leaned on her community to overcome such a tragedy and decided to return that
support by devoting herself to that very same community.

Before being elected to office, she helped organize Columbus’ annual Asian Festival as the chair for the Volunteer
Committee. She served on the Lao Volunteer Donation Association’s advisory board and on the organizing
committee for Ohio’s Asian American and Pacific Islander Legislative Day, an event she went on to chair.

She volunteers for various organizations throughout central Ohio, including Legacies of War, Ohio Asian
American Health Coalition, Community Refugee Immigration Services, Community Shelter Board and Asian
American Community Services. In her free time, she also mentors young adults who, like her, have had rough
upbringings and advocates for issues that impact people facing trauma.

Despite all the trauma she faced at such a young age, Tina used her strength to complete her secondary and higher
education.

Tina currently resides in Canal Winchester with her son, Teng. 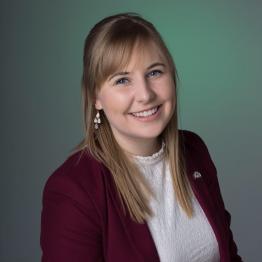 Lydia Ramlo is a fifth year at Ohio University studying Civil Engineering and Environmental Studies. Over her five

years, Lydia has been heavily involved on campus especially through extra-curriculars- Student Senate, Tau Beta Pi, Chi Epsilon, American Academy of Environmental Engineer, and The Period Project. Lydia is serving as President of Student Senate this year. Two years ago, Lydia participated in Elect Her, and now, she’s so excited to participate again as a interviewee in Elect Her!

Elect Her Tentative Schedule of Events at Ohio University