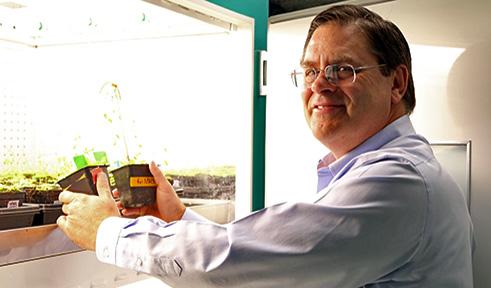 Structure, biosynthesis and function of plant cell wall hydroxyproline-rich glycoproteins as revealed by molecular biology and biochemical studies. Particular interest in the extensins, solanaceous lectins, and arabinogalactan-proteins. Additional interests in plant DNA barcoding and the molecular and biochemical mechanisms of salt tolerance utilized by halophytes.

Research in my lab is directed at elucidating the structure, expression, and function of the superfamily of hydroxyproline-rich glycoproteins (HRGPs) found in plant cell walls. HRGPs represent the major protein components of the plant cell surface (i.e., the plant cell wall and plasma membrane) and include the arabinogalactan-proteins (AGPs), extensins (EXTs), proline-rich proteins (PRPs), and solanaceous lectins. Using a variety of molecular biology techniques, we have isolated and characterized a number of cDNA and genomic clones encoding these cell surface proteins. Moreover, we have used these clones as molecular probes to examine the regulated expression of these genes during development and in response to various stress conditions such as wounding, pathogen infection, and drought. Biochemical studies are underway to determine the molecular interactions that these proteins undergo once deposited at the cell surface. Current efforts to alter the expression of these HRGPs in plants using a variety of techniques (antisense RNA, RNA interference, insertional mutagenesis, overexpression, expression of fusion proteins) in transgenic plants is also underway in order to elucidate their expression, molecular interactions, and functions. We have expressed a GFP-arabinogalactan-protein fusion in transgenic plants and used it to demonstrate that this particular arabinogalactan-protein is attached to the outer leaflet of the plasma membrane via a glycosylphosphatidylinositol (GPI) lipid anchor. We have also established a link between arabinogalactan-proteins and programmed cell death in plants. Our recent work makes use of the genetic model plant, Arabidopsis thaliana, in which we are studying various AGP mutants to elucidate AGP function and also isolating the enzymes (and the genes) responsible for glycosylating AGPs and other HRGPs. Our research on arabinogalactan-proteins uses many experimental approaches (i.e., molecular genetics, molecular biology, biochemistry, functional genomics, cell biology, plant physiology) and is supported by NSF and USDA grants.

Research in my lab also uses a bioinformatic approach to the identification and characterization of plant cell wall hydroxyproline-rich glycoproteins (HRGPs). Initially, Arabidopsis was used as the model organism for this work; now other plant genomes/proteomes are being examined. This bioinformatics work complements the lab bench work that we do on HRGPs and relates to the evolution of the HRGP superfamily and to the evolution of plants.

Another project in the lab involves examining the molecular adaptations of halophytes to saline environments. Here, Atriplex prostrata, a plant that thrives in saline environments, is being examined with respect to its physiological and molecular responses to growth under various salt concentrations. We are particularly interested in the role which glycinebetaine plays as an osmoprotectant. Consequently, we have cloned the genes that encode the pathway for the synthesis of glycinebetaine for the purpose of genetically engineering crop plants to survive in saline soils.

Agricultural Nanofertilizers to Enhance Growth and Drought Tolerance of Plants

A new project in the lab involves testing the hypothesis that agricultural nanofertilizers can improve the growth and drought tolerance of plants in order to feed the ever increasing human population and deal with climate change. Specific nanofertilizers will be administered to plants grown in environmental chambers under normal conditions and under drought conditions. Plants grown with standard chemical fertilizers will be used as controls. Plants will be monitored weekly for standard growth and developmental parameters (i.e., germination time, germination efficiency, plant height, leaf number, root length, flowering time, fruiting time, total seed yield, etc.), and subjected to statistical analysis to determine differences among the plant groups. We hypothesize that the plants grown with one or more of the nanofertilizers will show superior growth and productivity, particularly under drought conditions. Future work will involve producing and testing additional nanofertilizers, conducting greenhouse and field studies, and expanding work to include additional crop plants.

My lab is also involved with another project using DNA Barcoding to uniquely identify medical plants that are used in Pakistan and elsewhere in the world. DNA is extracted from such plants provided by our Pakistani collaborators; then particular chloroplast DNA sequences (e.g. rbcL and matK) are amplified using the polymerase chain reaction (PCR) and sequenced to generate a DNA Barcode. This work is designed to verify that the proper medicinal plants are being used by medicinal plant industries and to insure that samples are not contaminated or adulterated with undesirable or harmful plant species. This work is now being expanded to include the extraction and identification of bioactive compounds from selected medicinal plants to treat human diseases, such as cancer and diabetes.