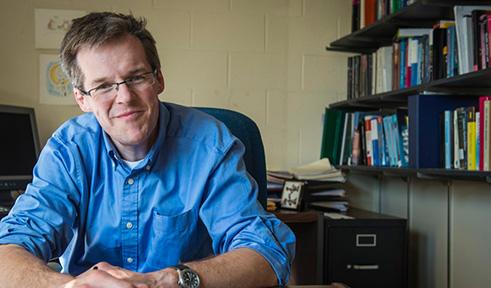 Phillips develops theories of the atomic nucleus. His research seeks to understand the forces between the neutrons and protons inside the nucleus. At present he has three main interests:

The experimental data Phillips works closely with is taken at various facilities around the world including the Thomas Jefferson National Accelerator Facility in Newport News, VA; the Triangle Universities Nuclear Laboratory in Durham, NC; the MAX-Lab facility in Lund, Sweden; and the RIKEN facility in Japan.

His is also involved in planning for experiments at the forthcoming Facility for Rare Isotope Beams at Michigan State University.

University of Maryland at College Park

Daniel Phillips grew up in Adelaide, Australia. He received his B.Sc. (Hons.) and Ph.D. degrees from the Flinders University of South Australia, graduating in 1995. From 1995-1998 he was a Post-doctoral Research Associate at the University of Maryland (College Park). In 1998 he took a position as a Research Assistant Professor at the University of Washington in Seattle, before moving to Athens to become an Assistant Professor in Ohio University’s Department of Physics and Astronomy in 2000. He has been a Professor at Ohio University since 2009. He has published over 50 papers in refereed journals, and his research is presently funded by the U.S. Department of Energy. He is a Fellow of the American Physical Society, and was named an “Outstanding Referee” by The Physical Review, the U.S.’s main journal for the publication of physics research. Daniel is married to Talinn Phillips, who is an Associate Professor in Ohio University’s Department of English. They are parents of two young children. In his near-non-existent spare time, Daniel enjoys watching cricket (and other sports, too!), reading novels, and listening to (mainly classical) music.