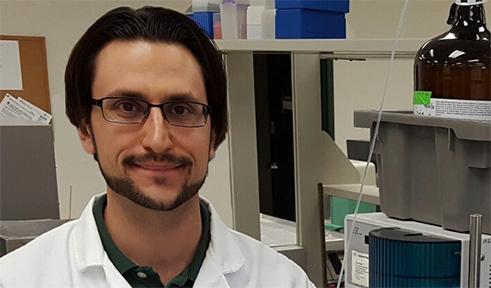 Research in the Holub Laboratory focuses on the development of chemical tools to investigate biological processes. More specifically, we use multidisciplinary approaches to design and synthesize non-natural molecules, such as synthetic biologics and profluorescent ligands, to study and manipulate protein-protein interactions.

There are currently three main areas of active research in the Holub Laboratory:

Proteins that function through non-covalent interactions with other biomolecules (nucleic acids, lipids, carbohydrates or other proteins) constitute a significant portion of the proteome. However, large-scale biomolecular interactions are often difficult to target with small molecule ligands. Recent evidence has indicated that such interactions can effectively be inhibited using peptides and small proteins that mimic the physicochemical properties of the binding interface. Indeed, such "synthetic biologics" possess enormous potential as tools for fundamental and applied research and can, in theory, be developed into therapeutics that target protein interaction surfaces. Using a technique called protein grafting, our group has developed a unique class of synthetic scaffold based on the small, well-folded protein scyllatoxin (ScTx) that targets BH3-binding sites within anti-apoptotic Bcl2 proteins. Using ScTx-BH3 domain mimetics as molecular tools, our lab studies how structural flexibility of the BH3 helix affects its ability to target anti-apoptotic Bcl2 proteins in vitro. Furthermore, we are using these constructs to facilitate cytochrome c release from mitochondria isolated from cell lines that display anti-apoptotic phenotypes. Our ultimate goal is to gain an in-depth understanding of the factors that govern molecular recognition between proteins within the Bcl2 family and to apply this knowledge to developing highly specific inhibitors of the BH3:Bcl2 interaction.

Our group is also interested in using bisarsenical dyes to study ligand-mediated dimerization and helix transitions of the human estrogen receptor (hER). Bisarsenical dyes such as FlAsH-EDT2 and ReAsH-EDT2 selectively label peptides or proteins containing tetracysteine motifs via thiol-arsenic exchange reactions, converting non-fluorescent 1,2-ethanedithiol (EDT)-bound forms into highly fluorescent tracers. Due to their small size, these molecules impart little steric bulk to the protein of interest, improving overall spatial and kinetic resolution. Protein-protein interactions or folding of a peptide chain can bring cysteine pairs into close proximity, facilitating the labeling of the tetracysteine motif. Importantly, the profluorescent nature of the bisarsenical dye allows the extent of protein interaction or folding to be quantified as a function of fluorescence intensity. A critical step in the design of therapeutic modulators of the hER involves evaluating their influence on receptor dimerization and structural transitions within the ligand-binding domain (LBD). Reliable methods to screen such dynamic events would greatly enhance our understanding of how specific ligands affect hER activity and would be advantageous in developing new therapeutics targeting the hER. Using interdisciplinary techniques such as organic synthesis and protein engineering, our group employs bisarsenical dyes to monitor ligand-mediated structural transitions within the hER-LBD. We seek to apply this technology to high-throughput screens that test large numbers of lead compounds for their ability to modulate receptor dimerization and affect structural changes within the hER.

Peptides represent a small, but growing class of therapeutic that occupy a unique chemical space between small molecules and large proteins. Peptides act as intrinsic signaling molecules for many biochemical pathways and thus hold potential to be developed as inhibitors (or potentiators) of such pathways for therapeutic intervention. Our group is currently involved in two projects that focus on the development of therapeutic peptides. In the first project, we are working to use peptides derived from the R1 domain of the microtubule-associated protein tau to target and inhibit the microtubule-affinity regulating kinase MARK2. Our laboratory has recently developed tR1, a sequence-based peptide mimetic of the tau R1 domain that inhibits the MARK2-mediated phosphorylation of tau. The tR1 peptide not only holds promise to act as a novel peptide-based kinase inhibitor, but also as a molecular tool that can be used to map tau-interaction sites within proteins that target the tau R1 domain. We aim to use this knowledge in developing next-generation therapeutics for the treatment of tauopathies including Alzheimer’s disease and frontotemporal dementia. In the second project, our laboratory is working to develop peptide-based antagonists of the human growth hormone receptor (hGHR). This work involves the development of short, helical peptides that mimic the site-1 interacting helix of the human growth hormone (hGH). These S1H peptides have been shown to inhibit hGH-mediated STAT5 phosphorylation in multiple cell lines and are being developed as full-spectrum inhibitors of hGH action. Our goal here is to apply such peptides in the treatment of diseases associated with hyperactive hGH/hGHR signaling, including cancer and acromegaly.