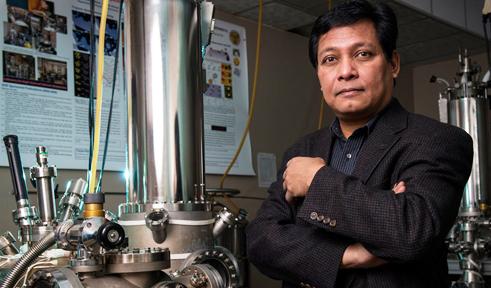 Saw-Wai Hla received his Master of Science from the University of Yangon, Myanmar in the area of experimental solid state physics/high-Tc in 1990. Following this, he was awarded a spot at the International Center for Theoretical Physics (ICTP) in Trieste, Italy. There he received his diploma in theoretical condensed matter physics in 1993. However, his true love has always been experimental physics. So he joined the ICTP-IJS program at the University of Ljublijana, Slovenia, where he worked in the area of experimental surface and thin film physics, and received his Ph.D. in 1997. He was then a postdoctoral fellow at the TASC-INFM and ELETTRA Synchrotron Facility in Trieste, Italy, from 1997-1998, after which he took up post-doctoral positions at the Freie Universitaet and the Paul Drude Institute for Solid State Electronics, both in Berlin, Germany, working in the group of Prof. K.H. Rieder. In 2001, Hla joined Ohio University and became an Associate Professor in 2005.

Hla's expertise is in single-atom and single-molecule manipulation in the research area of nanotechnology. He has received numerous scholarships and fellowships from the ICTP. At Ohio University, he received the College of Arts & Sciences Dean's Outstanding Teacher Award in 2006.

He travels widely, not only to deliver lectures and meet with STM experts world-wide. Hla is a bass guitarist and his hobbies include hiking, mountaineering, and skiing.