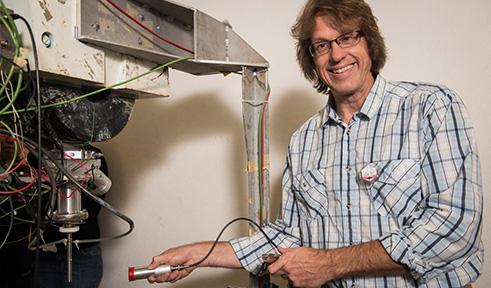 Carl Brune was born and raised in Ridgecrest, Calif.—a small town in the Mojave Desert. He attended the University of California at Santa Barbara (UCSB), where he obtained his B.S. degree in physics 1988. He then attended Caltech in Pasadena, California where he obtained his Ph.D. degree in 1994. UCSB and Ohio University are two of our nation's finest party schools, with perennial top-ten rankings and wild Halloween festivities. Caltech, on the other hand, brings up the rear on the party school ranking list. After obtaining his Ph.D., Brune took a post-doctoral position at the University of North Carolina at Chapel Hill (UNC), and in 1996 he became a research faculty member at UNC. While at UNC, he also had an office at Duke University, where much of his research was carried out. Brune came to Ohio University as a faculty member in 2001.

Brune works in the area of experimental low-energy nuclear physics. His research is primarily focused on nuclear astrophysics, the study of nuclear physics in astrophysics: from the big bang to stars to supernovae. Other experiments study the structure and fundamental interactions of nuclei. He is also interested in using nuclear physics techniques for practical applications such as medical physics and cargo screening. Many of his experiments are carried out at Ohio University's Edwards Accelerator Laboratory. Other work is performed at national laboratories and facilities at other universities, such as Oak Ridge National Laboratory and Notre Dame University.

One of Brune's favorite quotes comes from Ronald Reagan: "Trust, but verify."

Brune's hobbies include basketball, hiking, and the study of reptiles and amphibians.