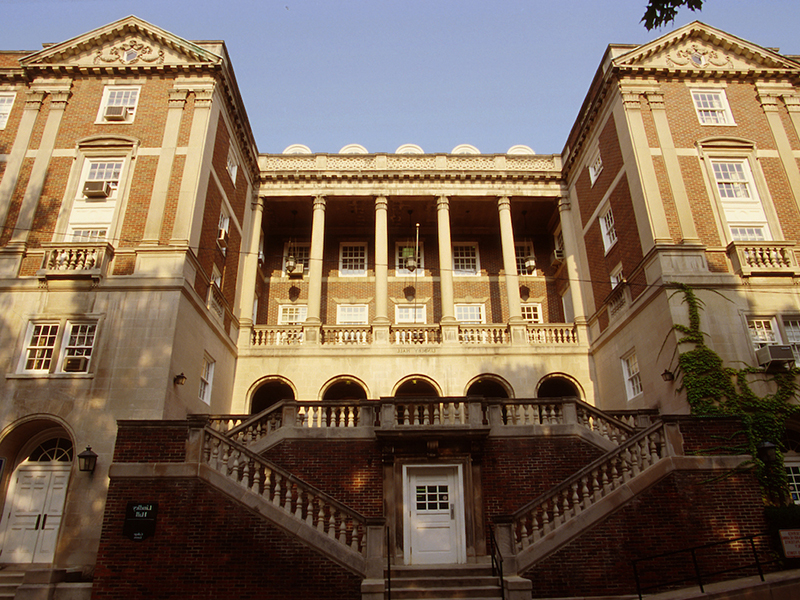 Lindley Hall is located in the College Green, coordinates G-4 on the campus map. It is marked as #26 on the map.

Lindley Hall houses offices for faculty, as well as staff, including University Communications and Marketing. The Survivor Advocacy Program is also in Lindley, which provides confidential support and advocacy services to student survivors of sexual assault, sexual harassment, dating/domestic violence, and stalking.

Lindley Hall, a residence hall for female students was built in 1917. The north wing was added in 1939 and the south wing was added in 1951. The building later housed the department of Human Resources (Personnel) until they moved to McKee House in 1981. The hearing and speech clinic and the department of Hearing, Speech and Language Sciences moved to Grover Center in 2001. Career Services and the Multicultural Center moved to Baker University Center in 2007. Legal Affairs moved to the East end of the West Union Street Office Center. The Office of Multicultural Success and Retention (OMSAR -- formerly the Office for Diversity), African-American Studies, Interdisciplinary Arts, School of Film, and the McClure School of Information and Telecommunication Systems have moved to 31 South Court Street. The department of Anthropology and Sociology has moved to Bentley Annex. The academic departments of Aerospace Studies (Air Force ROTC) and Military Science (Army ROTC) have moved to Bromley Hall.

Lindley Hall is named in honor of Jacob Lindley, the first president of Ohio University. A native of Washington County, PA, he was educated at Jefferson College and Princeton University. An honorary degree of Doctor of Divinity was bestowed upon him in 1853 by Ohio University. He organized the Academy (a preparatory school and college.) He was a minister and professor of Mathematics and Rhetoric and Moral Philosophy. His pulpit chair was given to Ohio University and used at commencement time and on highly ceremonial occasions. During his administration, the first students graduated (Thomas Ewing and John Hunter).