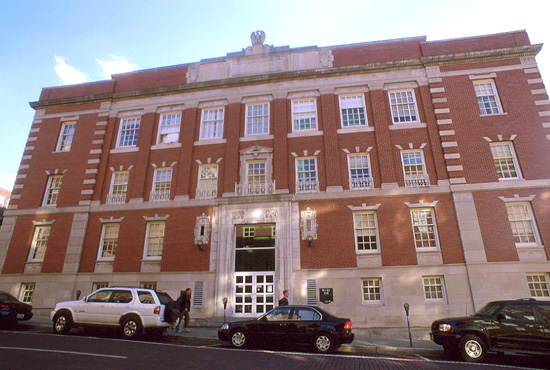 Bentley Hall and Annex are located on President Street, West of Chubb Hall, between coordinates G-3 and G-4 on the campus map. They are respectively marked as #27 and #28 on the map.

Bentley Hall and Annex house the departments of Economics, History, Political Science, and Sociology and Anthropology, together with lecture halls, classrooms of various sizes, and seminar rooms.

Built in 1923, the four-story building was originally the men's gymnasium and used for the basketball games and track. In 1961 it was renovated and used for classrooms and lectures. Starting in 2002-2003, a major addition, the Bentley Annex, was constructed at the West end of the building (on the site of the former Super Hall, to the right as seen in the photograph, above); the original Bentley structure has been renovated for classroom use.

Bentley Hall was named in honor of W. B. Bentley. A native of Maple Valley, NY, he was educated at Phillips Academy, Andover, MA, and Harvard University. He was a professor and Director of the Chemistry Department here at Ohio University for thirty-six years. He was a member of the American Chemical Society and the American Association for Advancement of Science. During World War I, he was a Captain in the Chemical Warfare Service and assistant in chemisty at the United States Torpedo Station in Rhode Island.