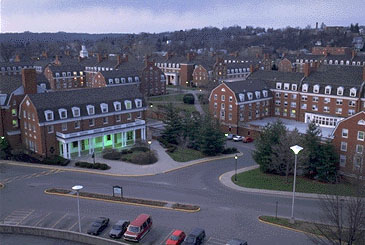 James Hall is a residence hall located in the West Green, coordinates E-4 on the campus map. It is marked as #121 on the map, and appears on the right-hand side of the photo, above. The four story building now houses 365 students.

Built in 1963, it was used as a guest house. It was originally known as West Green building number 2.

James Hall was named in honor of Herman Gerlach James, twelfth president of Ohio University, serving from 1935-1943. A native of Philadelphia, he was educated at the University of Illinois, Chicago, Columbia, and the University of Berlin. He was a teacher and consultant. Before coming to Ohio University he was president of the University of South Dakota. During his tenure the colleges of Arts and Education were regrouped into five colleges. A graduate college was reopened and voluntary ROTC was established. The Faculty Advisory Council was also instituted. He traveled to Brazil to promote cultural relations between the two countries at the request of the U. S. State Department.