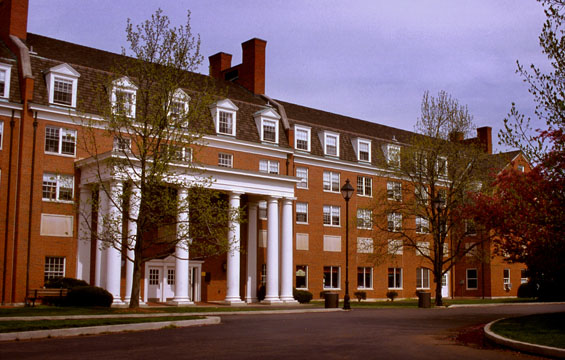 Boyd Hall is located in the West Green, between coordinates F-3 on the campus map. It is marked as #115 on the map.

Boyd Hall is a three-story residence hall. It also has a dining hall for the West Green students, a public computer lab, and offices for the Resident Life department.

The original Boyd Hall, built in 1907 was torn down in 1966 to make room for Alden library. The trustees of the university transferred the name to the new Boyd Hall. It was originally known as West Green building number 10.

Boyd Hall is named in honor of Margaret Boyd, Ohio University's first female graduate (of the class of 1873). Born in Carthage Township, Athens County in 1845, her family moved to Athens in 1868. She hoped to be admitted to Ohio University and was persuaded by her brother to attend class with him. President Solomon Howard received her as the first female student. She taught high school at Monroeville, OH, and Martinsville, IN. She was on the faculty of the Weslyan Female College, Cincinnati, OH. She returned to Athens, OH, and taught Latin and English until she retired. A fellow alumni wrote that "her selfless dignity supported her courage and the door her gentle spirit opened will never again be closed."