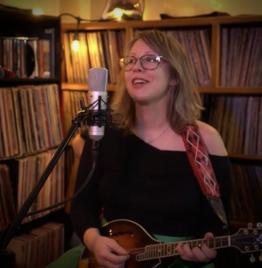 Jen Poland is a teacher, scholar, musician and filmmaker whose primary goal is to combine her areas of expertise in order to connect with students and create rich immersive learning experiences for her classes.  With her undergraduate degree from Kent State University in Education focused on project-based learning, she crafts robust and engaging curriculum combining theory and history with practice to provide engaging lessons that prepare students to meet and exceed industry standards in the Media Arts professions. Her Master's Degree in Applied Communication Theory and Methodology from Cleveland State University focused on the study of sound and image for Film and culminated in a thesis on Film Lighting that empirically demonstrated the psychological and emotional effects of lighting on film audiences. Her subsequent research, presented at international academic conferences, has ranged from the cinematic history of Las Vegas to the fragmentation of narrative in our current media ecosystem and the societal changes that have followed this media trend.

In addition to her work as a teacher and scholar, Jen grew up surrounded by music and became a “professional” musician in college, a path from which she has never veered. As a singer-songwriter-guitarist-mandolin player, she formed a band in 2007, and quickly began recording and producing music videos under Jen's direction. In 2015 her band Kiss Me Deadly was signed to Kingswood Records which released their debut album, What You Do In The Dark. The band has toured widely across the United States and Canada, and with Jen's growing expertise in sound production began recording on their own while continuing to create music videos. Music videos she directed of her musical compositions and recordings have screened at a variety of film festivals including Barebones International Film and Music Festival, Austin Spotlight Film Festival, Austin Under the Stars Film Festival, and University Film and Video Association Conference which included a live musical performance to accompany the showing of the video Marvin Shanks Remains.

In addition to her work as a teacher, scholar, audio engineer and musician, Jen maintains an active career as a filmmaker, with credits in screenwriting, producing, directing, cinematography, sound recording and both picture and sound editing. Like her work in education and music, Jen's film interest began during her undergraduate years even though her professional work in this arena did not begin until 2010 when she had developed a strong enough skill set to work at a high level in the field. Since that time, she has worked with numerous clients, ranging from investment banking companies to rock bands, building a large and diverse body of work. She has had documentaries, narrative films, experimental films, music videos and screenplays showcased at film festivals, and has taught filmmaking both at the secondary and collegiate level. Much of her work teaching film has been in the area of post-production, which she taught for 3 years at Cleveland State University. While teaching post-production she fell in love with how powerful sound design can be for the moving image, and it is this passion for recording, manipulating and mixing audio that has brought her to Ohio University.