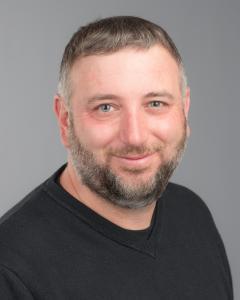 Andrew Holzaepfel began working with the Ohio University Performing Arts & Concert Series first as a graduate student in September of 1998 and then as a full-time employee in September of 2000. An Ohio University employee for 24 years, Andrew Holzaepfel has been the Senior Associate Director for Campus Programs in the Campus Involvement Center for 14 years.  Andrew oversees, supervises, and executes all programming and marketing efforts of the Campus Involvement Center including the annual Performing Arts & Concert Series, Baker University Center Programming, Opening Weekend Activities, Homecoming, major university Convocation Center concerts, and other special events. This includes over 220 events with an annual budget of approximately $1,250,000.00. Since 2000, Andrew has also held positions as Assistant and Associate Director for the Office of University Events. During this period he was primarily responsible for the annual Performing Arts Series, facility management of OU’s Memorial Auditorium, overseeing the Front of House Staff, the Ticket Office operations, Marketing and Promotions, and budgetary coordination for the office. He holds a M.ED degree from Ohio University and served as an OAPN board member from 2003-2007, 2012-2015; and is an active member of the Association of Performing Arts Presenters (APAP) and International Entertainment Buyers Association (IEBA).