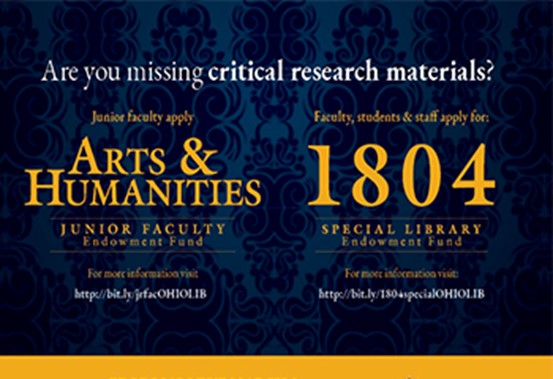 Established in 1979 to help University Libraries curate distinctive collections, the 1804 Endowment is open to all faculty, students and staff, while the Junior Faculty Endowment is for tenure-track faculty who are wanting to advance their personal research.

Recipients are awarded funds for the purchase of materials to be added to the Libraries’ collections that further the teaching, learning and research needs of faculty, staff and students. The endowment funds are for valuable or rare materials, or items that wouldn’t normally be purchased with the Libraries’ annual acquisitions funds. The awardees of the endowments are also recommended to the dean of University Libraries by the University Library Committee, which is a group of faculty and staff appointed by the President.

All students, faculty and staff are encouraged to apply for the 1804 Special Library Endowment Fund, and faculty who are working toward their tenure requiring specialized research materials can apply for the Arts and Humanities Junior Faculty Endowment Fund. The deadline for applications is March 13, 2023.

The three 1804 Special Library Fund Endowment 2022 recipients were Miriam Shadis, Michele Clouse and John Brobst, all of whom are associate professors in history.

Shadis’ proposal was for the purchase of four expensive facsimiles of medieval books. The titles include, “Commentary on the Apocalypse,” by Beatus Liébana, who was a Spanish monk and theologian, as well as “Biblia San Louis” which was a moralized Bible commissioned by Louis IX of France, and sent to his cousin, Fernando III of Castile.

Shadis mentioned that she believes her colleagues in the history and art history departments could use the facsimiles for classroom use, as well as possibly those in modern languages, philosophy and English. Shadis’ students have already been using the materials in a classroom visit to Alden Library.

“I'm hoping that at some point I'll be able to build some assignments around these particular books, so that they [students] can go on their own to the [Alden] Library and really spend some time with them, think about them and use them,” Shadis said.

After encouragement from Miriam Intrator, special collections librarian, and having worked several times with the Libraries’ rare books collection, Shadis decided to apply.

“It was actually quite easy to write the 1804 grant,” Shadis said. “I was so pleased to get these books, and it’s so exciting to have them [the facsimiles] over here, and I'll probably be looking for other ways to get more if I can.”

Clouse was also encouraged to apply for 1804 funding by both Shadis and Intrator.

“I started looking at all of the things that were possible, and I was just really blown away,” Clouse said. “I think the one thing that got me very excited about the proposal was the opportunity to share these beautiful works as books.”

Clouse’s proposal was for the purchase of 10 facsimiles covering early modern history and the history of medicine. Some of the titles she picked were, “Medici Aesop,” “Codex of Medicine of Frederick II,” and “Natural History Atlas of Philip II.”

After working remote for the past few years at the University, Clouse is excited to use the materials with her students at the Libraries to allow them a hands-on experience, which can be a different experience than asynchronous learning.

“I'm hopeful that this is kind of a way to help ease students into experiencing their education in another way,” Clouse said.

This is Brobst’s third time receiving the 1804 Special Library Endowment after having been a recipient of it in 2020 and 2018. Some of his previously obtained awards included “The Persian Gulf and Red Sea Naval Reports,” which is a 15-volume set that complements other historical collections held by the Libraries. This year, he acquired a collection of official British records entitled, “Central Asia, Persia and Afghanistan 1834-1922: From Silk Road to Soviet Rule.”

In his proposal, he mentioned how the purchase of the records would support his teaching and research on the British Empire and Eurasian geopolitics during the modern era, but he will also hopefully lay the foundation for an Honors course at OHIO.

“I hope to use this collection as the basis for the creation of an OHIO Honors section of HIST 3866, in which students would complete a paper based on research in archival sources,” Brobst said.

From previous years, recipients have purchased materials such as documentaries for the annual Sustainability Film Series, factbooks about African American history and books of poetry and devotional prose.

For more information, contact Janet Hulm, assistant dean for collections and digitization strategies. For questions or access to these facsimiles and other rare book materials, contact Miriam Intrator.