OHIO Mock Trial gets up to speed at Indy Mock Hundred 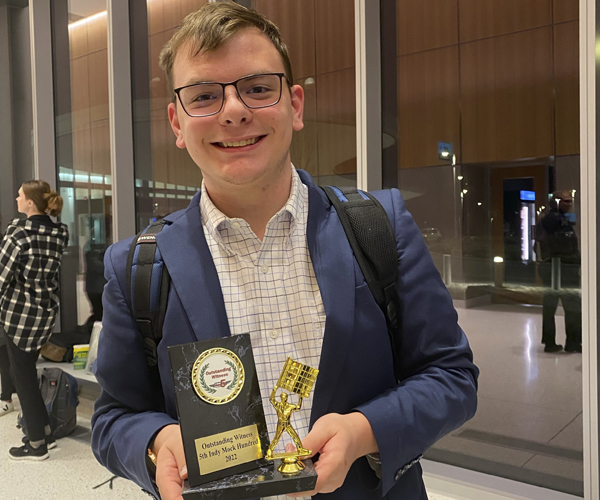 Ohio University's two mock trial teams hit the accelerator at the Indy Mock Hundred in Indianapolis on Nov. 12 and 13, with Casey Patterson earning an outstanding witness award and both teams winning ballots.

As part a Green team witness for the plaintiff, Patterson was recognized for his portrayal of accident reconstructionist Drew Hubbard. Patterson ranked as the top witness on three of four ballots. This year’s case involves a civil negligence suit against a flight company after the death of both the plaintiff’s husband and the company’s business owner in a plane crash.

“I am proud of my performance, but even more so of my team who helped me get here,” said Patterson, a junior studying political science pre-law with a Law, Justice and Culture Certificate in the College of Arts and Sciences. This is his third year on the team, having participated in the Summer Law and Trial Institute as a high school senior.

Both OHIO teams improved from their first competition of the season, notching several wins and split decisions over impressive programs.

In mock trial competitions, every trial is judged by two judges who record their scores on a ballot, and it takes both judges' ballots to win a trial.

“I was very proud of both teams. We had a lot of good individual and team performances. We have seen a lot of competitive teams through the invitational season, and to see the growth and improvement from day one to now has been incredible. It only builds the teams' confidence and belief as we gear up for the nationals circuit,” said Mock Trial President Nick Bohuslawsky.

Based on feedback from the judges and upcoming case changes from AMTA, OHIO's team is preparing to to make trial strategy revisions for competitions in the spring season, beginning with a trip to Portland to compete in the Ninth Annual Frohnmayer IX Invitational hosted by the University of Oregon.  The team’s regional tournament will take place in February 2023.

OHIO Mock Trial is affiliated with the Center for Law, Justice and Culture and coached by Larry Hayman, Esq., director of legal engagement and pre-law program.