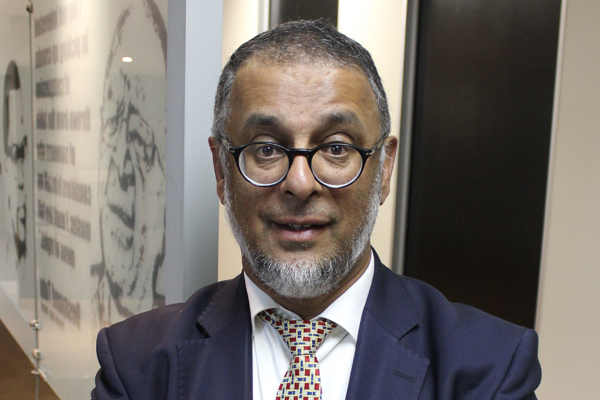 South African human rights advocate Mohamed "Shafie" Ameermia arrives in Athens on Sept. 1, bringing with him a lifetime of expertise and experience to share with Ohio University students as a Robert and Rene Glidden Visiting Professor.

Ameermia is a legal consultant and the current commissioner for social cohesion and nation building in the Republic of South Africa and also a former commissioner on the South African Human Rights Commission.

During his stay in Athens this fall, Ameermia will talk to students in various political science, philosophy, religious studies, geography, international studies, and sociology classes. His discussions with students will include advice about career opportunities in international and transnational organizations.

"Commissioner Ameermia brings a wealth of experience on human rights, governance, and South Africa, to Ohio University. We are thrilled that he will be closely working with our students and helping us prepare them for multiple career paths, including opportunities in international organizations and diplomacy. We all look forward to learning from the commissioner during his stay here," said Nukhet Sandal, associate dean in the College of Arts and Sciences and associate professor of political science.

Ameermia's visit is hosted by the Political Science Department in the College of Arts and Sciences, but his visit is the result of a truly interdisciplinary effort, involving additional support from the Center for Law, Justice, and Culture, the Center for International Studies, the Institute for Applied and Professional Ethics, Philosophy, Sociology and Anthropology, the College of Arts and Sciences, and the Honors Tutorial College.

"I am thrilled that the Ohio University community will get the chance for extensive interaction with former South African Human Rights Commissioner Mohamed Ameermia. He has a long and distinguished record of championing human rights and human dignity, both in the Republic of South Africa and internationally. The Glidden Professorship will provide a valuable opportunity for him to share his experiences with both students and the wider University community," said James Petrik, professor and chair of philosophy.

"I am grateful for the support of the Glidden Professorship Program and that of many other departments and units that made Ameermia's visit a possibility," Petrik added.

Ameermia also will deliver several public lectures and workshops and spend time working on a memoir detailing his life advocating for the vulnerable and disenfranchised.

"I am looking forward to using this opportunity to pursue legacy projects, in the hope of leaving the world in a better place. I am blessed, privileged and extremely honored to be part of this program," Ameermia said of his work this fall at OHIO.

Talks are open to the public

In his first public talk on Sept. 13, Ameermia will discuss “The South African Human Rights Commission: Litigation and Legislation for Upholding Human Rights and Equality under the Law,” at 7 p.m. in Bentley Hall 140.

His talk addresses the 163 billion in South African Rand award he won for 250,000 indigent farm-workers, 80 percent of whom were women, with many of them single mothers, who had been exploited by an unregulated micro-lending industry. The lenders had taken advantage of the fact that there was no judicial oversight of the practice of microlending and the garnishing of wages in connection with allegedly delinquent loans.

This talk is co-sponsored by the Center for Law, Justice & Culture.

In his second public talk, which will begin at 4 p.m. on Nov. 10, Ameermia will discuss “The Case of Caster Semenya.” This lecture is hosted by the Institute for Applied and Professional Ethics.

Ameermia has a long and distinguished record of advocating for the poor and oppressed within the Republic of South Africa (RSA) and internationally. Most notably, his efforts in this regard included serving on the South African Human Rights Commission from 2014 – 2021. This commission is a constitutionally mandated national body charged with upholding the human rights of all citizens of the RSA.

Born in 1961, Ameermia grew up in the rural South African town of Bronkhorstspruit. As a member of the non-white majority, he experienced firsthand the injustices inflicted by the apartheid regime on persons of color. He was, for instance, not allowed to attend the governmentally funded local school, and his parents had to draw on their limited resources to send him to an inferior boarding school many miles from home. He also saw his parents forcibly deprived by the government of their livelihood—a humble but successful country store—and forced to start over in another location. Ameermia was, however, lucky in one respect: his parents emphasized to their children the crucial role that education plays in social change, and they sacrificed to ensure that their children were educated. It was through his parents’ diligence and sacrifice that Ameermia was able to achieve an LLB degree (an undergraduate law degree) from the University of Witwatersrand in Johannesburg in 1989.

Putting his education to work, Ameermia embarked on a professional career devoted to challenging the injustices he’d witnessed as a child and that continued to oppress people of color in the Republic of South Africa. His initial efforts were directed to the struggle to end apartheid, including providing legal representation to many anti-apartheid activists who had been illegally detained in the Gauteng Province. He also successfully challenged the forced displacement of black citizens of Bronkhorstspruit to a location over 100 miles away. Because of his important contributions to the anti-apartheid movement, when the first democratic elections were held in 1994, the recently reinstated African National Congress tapped Ameermia to run for local office in Bronkhorstpruit. While his particular campaign was not successful, Ameermia continued his work within the African National Congress and helped the party win a majority of seats in the Gauteng Provincial Government.

In 1999, Ameermia was appointed town secretary and legal advisor to the Municipality of Makhado in the Limpopo Province. There Ameermia worked to improve equality of access to education by making the municipal library a source of outreach for children living in neighboring villages. In addition, he facilitated the restitution of two large parcels of land seized under apartheid to residents in the historically dispossessed communities of Getrudesburg and Kraanspoort. It was also during his time as town secretary that Ameermia completed his LLM degree (graduate law degree) at the University of Pretoria. Subsequently, in 2003, he joined the Limpopo Provincial Government as a legal advisor at a senior management level, where he focused on ending fraud. His accomplishments included recovering 33 million Rand for the Provincial Government, monies that were then used to build five secondary schools to serve the poor in the Limpopo Province.

In 2006 Ameermia was promoted to Chief Director of Legal Services for the Department of Human Settlements in Limpopo. Over the next five years in this position, he oversaw a program that provided 65,000 low-cost housing units for approximately 450,000 of Limpopo’s poorest residents. And in 2011, he added another item to his already impressive list of accomplishments when he facilitated the construction of municipal libraries across Limpopo.

In 2014, Ameermia was able to pursue his vocation of promoting human welfare and dignity on an even larger stage, when he was appointed to the South African Human Rights Commission from 2014 - 2021, including a year as the acting chairperson. While serving on the Commission, Ameermia was tasked with three national initiatives: the Right to Housing, the Right to Water and Sanitation, and Business and Human Rights.

About the Glidden Professorships