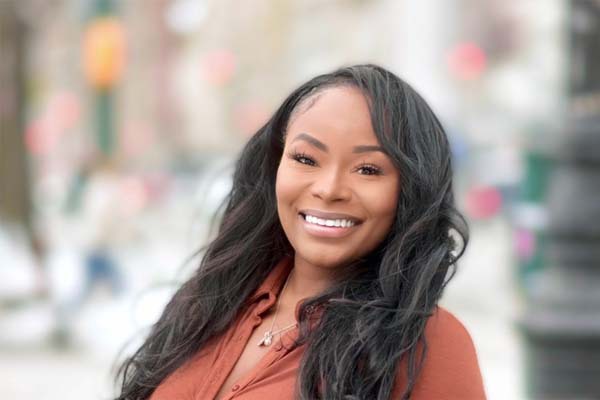 Ohio University alumna Olayemi Olurin is a public defender at the Legal Aid Society and a lawyer in New York City. She recently authored an opinion piece in Teen Vogue headlined "Law & Order Taught Americans to Root for the Police," writing specifically about the horrors of Rikers Island.

Her op-ed, published in coordination with Zealous, an organization working to amplify the perspective of public defenders, argues that police dramas help convince Americans that more policing is always the answer.

Olurin earned a B.A. in Political Science Pre-Law, a minor in African American Studies, and a Certificate in Law, Justice and Culture in 2015 from the College of Arts and Sciences. A native of the Bahamas, she was an active and distinguished student at OHIO, inducted into honor societies Phi Beta Kappa and Alpha Lambda Delta and receiving a variety of other honors.

"Extreme events of injustice or cruelty, usually perpetrated against the most 'sympathetic' people targeted by mass criminalization (those charged with low-level offenses, women, youth, and the elderly), generate public outrage and awareness. Then the stories fade from the news, everyone forgets, and the status quo prevails. Meanwhile, 'everyday,' but no less harmful, injustices persist on a mass scale and are never covered. So unless you’re in court every day, like me, or living in an overpoliced and criminalized community, or caged on Rikers itself, it’s as if this crisis isn’t happening," she writes in Teen Vogue.

"It might seem cliché to blame societal ills on the media, but the relationship between our country’s comfort with mass caging and the depiction of crime and punishment that we see in popular culture seems more than coincidental. Media consumption is what we all have in common. It’s why even my mother, who lives in the Bahamas, often tells me 'some people belong under the jail,' or that 'some people are just evil, Olayemi.' She, too, has spent years watching Law & Order: SVU," Olurin writes in the article.

Olurin has been an outspoken political commentator, especially about her work as a public defender and about public policy. She recently represented a man in a case where bystanders said an officer kneeled on his neck but body camera footage was damaged. "I called for the Queens District Attorney’s office to charge the officer and dismiss the charges against my client; the office dismissed the charges but didn’t bring them against the officer," she said.

Earlier in the year, Olurin spoke to The Hill after the Rittenhouse trial, arguing that the Rittenhouse verdict makes a mockery of self-defense, that it opens the gate to violence at protests, and that the trial stigmatized mental health to justify murder.

Olurin is an analyst on the “Law & Crime Network” and a repeat contributor to The Hill.

In this interview, Olurin talks about her experiences as an undergraduate student at OHIO from 2011-2015.

Q: What led you to your major, minor, and certificates?

A: I always knew I was going to be a lawyer, so political science was a natural result of that, but everything else happened because of the Learning Community I was in freshman year. Believe it or not, my 18-year-old self didn’t want to take African American studies or women and gender studies — I thought I didn’t need them. But OHIO was like, ma’am, you need to be well rounded, get in there. And then I discovered just how much I truly didn’t know. I started taking more of those classes, so by the time I was in African American Studies classes with Dr. Robin Muhammad and Dr. Ronald Stephens, POLS 101 with Dr. Sarah Poggione, Critical Race Theory with Dr. Vince Jungkunz, Constitutional Law with Dr. Kathleen Sullivan, and class with Larry Hayman, Esq. I became who I am now.

A: So many of my OHIO professors have a special, special place in my heart. I cannot truly give words to how valuable and influential each of these people were to me, and not just my experience at OHIO, but to the lawyer I am today. It’s so much more than just having been nice to me or written me recommendation letters — and they definitely did that! Dr. Jungkunz, Dr. Stephens, Dr. Sullivan, Dr. Poggione, Larry Hayman. Each one of them taught me something truly critical about myself.

Dr. Poggione was my professor in Introduction to Political Science in my freshman year and my advisor. She’s who made me realize what kind of courses I liked and would benefit from taking and pushed me toward the path that put me into more advanced classes freshman weren’t taking. That led me to meet Dr. Jungkunz, Larry Hayman, and Dr. Stephens — who collectively helped me shape my coursework and realize I wanted and needed to study not just law in a vacuum. They really influenced my core beliefs. Dr. Poggione was also the best-dressed professor I ever had, and she’s shown me love since the day I walked into her office.

Dr. Sullivan is probably directly responsible for me becoming a public defender, and it’s a story I tell often. She was my thesis advisor, and she pointed out to me that I was a gap scholar, which was a term she used affectionately. But I remember thinking yea, she’s right. And I didn’t think it was sufficient to enter the legal profession, where Black attorneys make up about 5 percent of the profession but are overwhelmingly overrepresented in the criminal system, and merely be a scholar not doing anything tangible about that. She’s also responsible for introducing me to my love for constitutional law.

Dr. Stephens was a true wealth of knowledge, and he opened me up to so much Black history... in his classes — something he still continues to do because I often still have him send me his course syllabi so I can stay well-read. And he helped give me a voice. Dr. Stephens encouraged me to apply to the National Council for Black Studies conference while I was a junior. I was accepted, I went, and I presented my paper to so many people. I’ve done a million panels and presentations since, but he saw the vision first, and I appreciate him for that and everything else he’s done for me and all his other students.

Larry Hayman knows I’ll never get tired of singing his praises! Larry is the greatest pre-law advisor anyone could ever get and this is a hill I’ll die on. Larry gave me the single best piece of advice when I was applying to law school — on top of all the hands-on help he gave me during the entire process, editing statements, introducing me to people at the law school fair etc. He said to me, “You don’t know what makes you a desirable candidate to an admissions counselor looking at your application, so don’t sell yourself short by not applying or by emphasizing or explaining what you think are flaws.”

Dr. Jungkunz was my professor, but he’s also my mentor and friend, and I not only couldn’t have made it through law school without him, I couldn’t even be the person I am without him. I’ll never tire of giving him his flowers. I don’t know who I’d be if Dr. Jungkunz hadn’t put the first James Baldwin book I ever read in my hands, if he’d never introduced me to Derrick Bell or Charles Mills, or if he hadn’t taken time to let the class know "The Miseducation of Lauryn Hill" is a certified classic. I hope students know how lucky they are to learn from him, and everyone around him feels blessed to know him, because they are.

My honorable mentions: Dr. Haley Duschinski, Dr. Muhammad, Dr. Catherine Cutcher, Kimberley Fletcher, Dr. Bayyinah Jeffries, Matthew Nunes — my chosen faves. These are incredibly intelligent people who are also nice as pie. Dr. Muhammad taught me the first AAS class I ever took and she continued to teach me until I graduated, and she still roots for me on Facebook all the time. Dr. Cutcher is probably one of the nicest people I’ve ever met, and I was lucky to be her learning community leader. Kimberley Fletcher showed me that the Supreme Court actually is not an apolitical body and that I could and should scrutinize their decisions, even if that meant dragging Rehnquist for a full-length paper. Matthew Nunes taught me English and I loved him. Haley Duschinski knows, like Larry knows, that I love her to the moon and back — there’s pretty much nothing she or Larry could ask me for that I’d say no. They have been champions for the students who’ve been fortunate enough to be in the Center for Law, Justice & Culture. Dr. Jeffries is a phenomenal scholar and person, and I was blessed to get to do an independent study with her my senior year.

Q: Do you still keep in touch with any of your faculty?

A: Yes, with almost every single one of them I mentioned, and then some.

Q: What was your ah-ha moment at OHIO — that point where you said to yourself, “I’ve got this!”?

A: I never doubted whether I had it, to be honest, at least not as an undergraduate. I went to college knowing I would eventually be a lawyer and that I was going to do well enough that I could go to law school on a full scholarship. I literally moved to another country to make that happen, so it really didn’t surprise anyone who was paying attention.

A: The month after graduation, I spent it just running Court Street with my friends until I left campus. It’s definitely a life highlight.

A: The one thing I didn’t miss out on, and that I think most students do, is the benefit of forming truly valuable relationships with your professors. I don’t mean just doing well in their class so they could write you a letter that says you got an A. I mean getting to know them, letting them help you figure out who you are and what you want to do, letting them really be mentors.