History
of the Marching 110 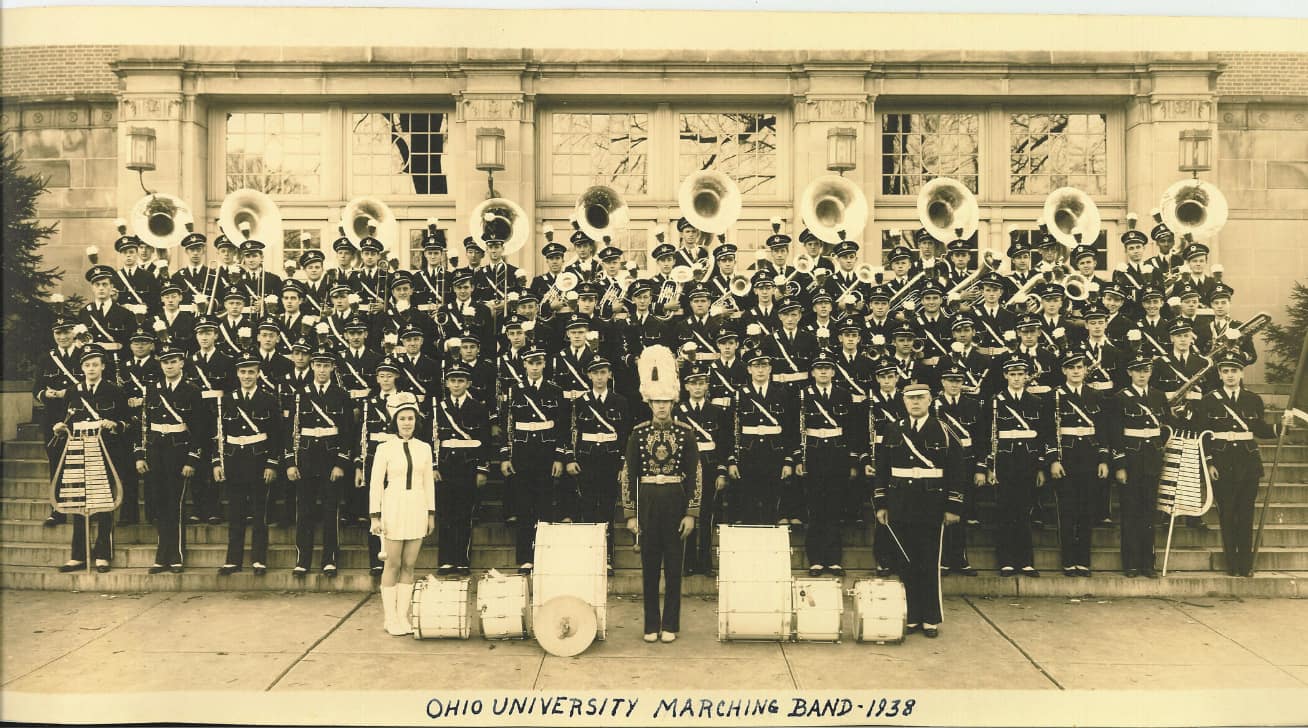 1923–1966: From the Beginning: The Formation of the Ohio University Marching Band

In 1923, an Ohio University student by the name of Homer Baird decided that Ohio University needed a marching band of its own. So he organized the first meeting about such a group at Ewing Hall where over 40 musicians were in attendance.

At that meeting, Baird was elected president and he made arrangements with a local instrumental teacher named Raymond Connett to direct the band for free. Baird is quoted as saying, "Fortunately, we had at least 25 top-notch musicians and the others were coming along fine." Enough money was raised to furnish the band with about 30 blue coats and white caps, while the members had to buy their own white trousers.

During the football season, the town of Athens raised enough money to send the band with the football team on a special train to play OHIO's toughest rival (Ohio Wesleyan) on their Homecoming Day. After the game, the Ohio Wesleyan fans stated "that [OHIO] was the best band that had been on their gridiron that year."

After the 1924 season, the records are unclear as to who directed the band and when. Around 1927, Curtis Janssen took over the direction of the OUMB and arranged the Ohio University's Alma Mater. Janssen also established an all-girls band, which was disbanded after he left OHIO. When Janssen left, Professor Dan Martino took over the OUMB and after Martino came Professor Charles Gilbert. Gilbert and his assistant, William Brophy, reestablished the all-girls band along with majorettes.

Prior to 1967, the men in the band wore green blazers and gray slacks with striped green and white ties, while the women wore the same blazers and ties, but with gray skirts. But in 1966 when Gene Thrailkill took over the direction of the OUMB, the "big switch" came about. This included removing all women and majorettes from the band in the 1967 fall marching season. Despite the removal of the majorettes, Thrailkill decided to keep a drum major and a twirler.

In 1967, Thrailkill introduced the hard-driving, high-energy style you see today. Bill Fay was the first drum major of the "Marching Men of Ohio," while freshman David Fowler was the twirler (Fowler would later begin the tradition of dancing to "Ain't Been Good" which the 110 still performs today). The removal of women from the band caused quite a big controversy in Athens resulting in articles in The Post (Ohio University's student newspaper) and letters to the editor. According to Tom Edwards (OUMB announcer 1966-1969), Thrailkill gave a big pep-talk before the first home game in 1967. "He said that the drive-on and the first note of Stand Up and Cheer would either make or break this band forever. Obviously, the student body was absolutely blown away -- and the controversy died a very quick death."  In 1975, under the direction of Ronald P. Socciarelli, women were readmitted into the marching band, while retaining the name "Marching 110."

Many other changes involving the band occurred in the late 60's as well.  The Ohio University fight song, Stand Up and Cheer, debuted in it's current form with a fanfare to introduce the song. The Ohio University Alma Mater was also changed with the addition of a new introduction.