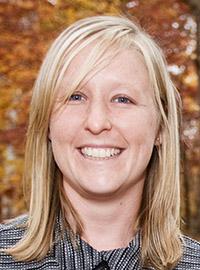 Kruse Daniels has worked passionately on stream reclamation since the tender age of 10. She started attending University classes at age 11 and earned a civil engineering degree by her late teens. After obtaining a doctorate in hydrogeochemical engineering in England, Kruse Daniels returned to her alma mater, stepping into the role of her former mentor with the Environmental Studies program at the Voinovich School of Leadership and Public Affairs.

“Mining, oil and gas extraction and industrial activity have long environmental legacies,” she says. “I work to characterize impacts and treat or manage those impacts.”

At the center of her work is a common regional problem dotting much of the Southeast Ohio and Appalachian landscape – acid mine drainage (AMD). The Appalachian region of Southeastern Ohio is riddled with closed and abandoned coal mines. Though most of the mining has long-since stopped, damage to the surrounding land continues to spread.

As with any holes, over time the mines have gradually filled with water. Iron sulfides – left over from the coal removal – react with the water, becoming iron hydroxides and sulfuric acid once the water is exposed to oxygen. This acid helps to leach manganese, cadmium, zinc, copper, arsenic, and aluminum, creating a lethal concoction that, once it reaches creeks and streams, turn it orange and killing nearly any living organism.

Kruse Daniels leads a team of researchers looking at chemical and physical barriers to stream recovery, AMD treatment system performance, and improving steel slag use to reduce stream acidity – a material that performs 10 times better than that of limestone for buffering acid mine drainage.

The University's unique watershed restoration work has emerged as a model for other communities in Ohio with similar mine damage situations and has been an overwhelming success on many levels. On one creek alone, Ohio University's research and technical assistance has led to over $15 million in mine land reclamation work, reducing sulfuric acid stream leaching by a staggering 5,500 pounds per day and reclaiming over 100 miles of stream.

For Kruse Daniels and her team, the most marked success is the return of life – fish, bugs and microorganisms that are once again thriving in restored streams.

Kruse Daniels’ expertise is stream chemistry, post-mining and post-industrial land and water remediation, and oil and gas pollution, as well as acid mine drainage in the Appalachian region.