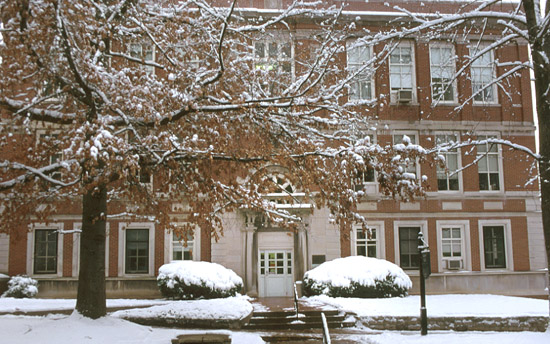 Tupper Hall is located in the College Green, coordinates I-4 on the campus map. It is marked as #13 on the map.

The original Tupper Hall was erected in 1883 on the site known as Ewing Hall. In 1896, it was moved just south of Cutler Hall and was known as the Chapel Building. Later it was known as Fine Arts Hall. In 1962 it was renamed for General Benjamin Tupper. The building was torn down in 1966 to make room for the new library. The current Tupper Hall was constructed in 1915, originally known as the "Ag" Building and renovated in 1965. The name, Tupper Hall, was transfered to the "Ag Building" in 1966. The three story building contains classrooms, offices, studios, and a conference room.

Tupper Hall was named in honor of Benjamin Tupper. Born in 1738, he was apprenticed to a tanner until he was 16 due to the early death of his father. He taught school for several years before joining the Revoluntionary Cause as a lieutenant. He served as a lieutenant colonel, colonel, and retired from the army with the rank of brigader general. He later was a representative in the state legislature.