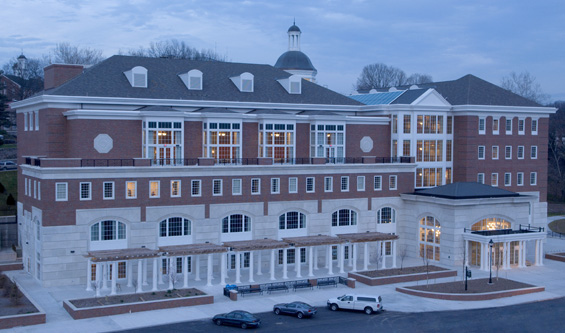 Baker University Center is located at the junction of Mulberry Street, Court Street, and Park Place, coordinates G-4 on the campus map; it is marked as #23 on the campus map. It is located on the old Hocking River riverbed, between Richland Avenue and Emeriti Park, across Oxbow Trail from Grover Center, Bird Arena, and Porter Hall.

Portraits of past University presidents are on display in the Presidential Portrait Gallery in the pre-function area of the Baker University Center Ballroom (Fourth Floor). You may also want to examine the online collection of portraits and biographical sketches of the former presidents.

Construction of Baker University Center began in the spring of 2004. The photo above was taken July 25, 2006, when exterior work was very nearly complete.

Photos taken during the later stages of the construction project are also available online (that page includes five photos, with a total download size of just over 1 MByte).

Baker University Center is named in honor of John Calhoun Baker, the fourteenth president of Ohio University, serving from 1945 through 1961. He was educated at Juniata College and Harvard University. Under his guidence regional campuses were created, an extensive Nigerian educational program was established. Many new programs, scholarships and committees were established. The Ohio University Fund (now Foundation) was established to foster private giving and the John C. Baker Fund to support faculty improvement and research efforts. During his tenure numerous buildings, including most of the residence halls were built. Upon retirement he continued to pursue his interests in educational business and international affairs. In 1995 he returned to the campus for a gala celebration of his 100th birthday. He died in 1999.