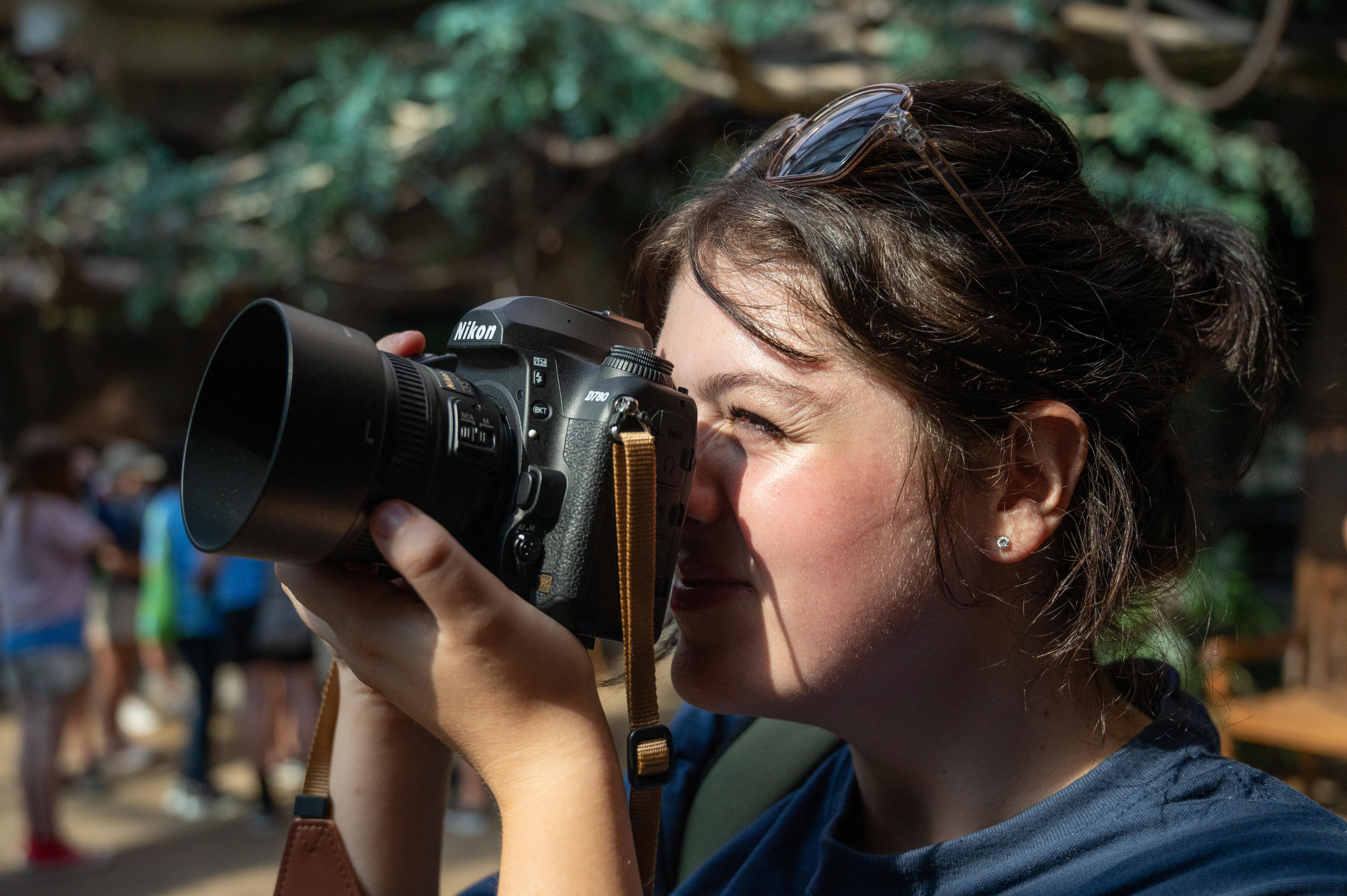 Don’t be afraid to take chances.

That is what Ohio University student Emily Hanna thought when she reached out to the Cleveland Metroparks Zoo to see if they had any internship opportunities while she was in high school in 2019.

While no openings were posted, working at the zoo would align with her interests of animal conservation, photography and design. So, she took a chance and emailed someone at the zoo, and she was able to get connected with the graphics department. She then spent part of her senior year helping the department.

As this past summer approached, Hanna, now a junior photojournalism major in the Scripps College of Communication’s School of Visual Communication, didn’t see any openings for zoo internships. So, she took another chance and reached out again, securing another internship. This time, she spent the summer in the graphics lab working alongside her coworkers.

“It’s a lot more hands on and it’s cool seeing the stuff I design being put out on the zoo grounds,” Hanna said. “I’m very passionate about animal conservation and being able to incorporate digital media and wildlife is amazing.”

A typical day at the zoo is hard to describe, Hanna said, because often each day’s tasks were different depending on what was needed around the zoo.

Every morning, Hanna walked through the park to check graphics and signs to make sure all were ready for the day. She reset any that needed fixed and made a list of any that would need repaired later on. She then checked with her supervisor about any projects that need to be completed.

If any signs were needed for closures or moving of animals, Hanna and the graphics team made sure the signs were ready to go. Some cases were more urgent than others.

One urgent graphic design need that occurred during the summer was when the Cleveland Metroparks Zoo’s corpse flower bloomed in July. One of only 1,000 flowers remaining, the bloom is a rare occurrence, happening only once every seven to ten years.

“The line was out the entrance that day; it was crazy long. We worked on the sign then because there was no set time for when the flower would bloom. We made signs for approximate wait times and where the line began,” Hanna recalled. “It was very cool to be there that day.”

While the internship was design heavy, Hanna continued to develop her photography skill, too, taking new photos of some of the animals to update animal identification signs across the zoo.

“I’m a very creative person so I love anything that’s artistic and design worthy. I have really enjoyed my internship,” she said. “A lot of people have these ideas that zoos are bad. Since working at the zoo and being there, meeting the keepers and all the kinds of people involved, I think the Cleveland Metroparks Zoo is doing a very good job with the whole conservation effort and I [have enjoyed] working to show that message to the public.”

Though she is a photojournalism major, Hanna says her studies at OHIO have prepared her well for her design internship with the zoo.

“I couldn’t see myself at any other school, to be honest,” she said. “My main attraction to OHIO was definitely Scripps (College of Communication). I wasn’t sure on my major. I wanted to do something worldly, I wanted my work to be seen but with a message. When I found out about the photojournalism program here, it really stuck out to me.”

In addition to animal conservation, Hanna is also interested in political photography. She will get to explore that more this semester as she’s studying in Washington, D.C., as part of the Scripps Semester in D.C. program.

“NPPAOU has definitely provided me with a lot of good connections, good friends, good advice, and their mentorship program is excellent as well,” she said.

When it comes to applying to internships, Hanna encourages all students to not be afraid to take chances, even if the major doesn’t align or if there are no current postings.

“If you have a passion, don’t be afraid to look for something that isn’t posted and take a chance. You should put yourself out there and apply to many places that interest you, because you should do something you really like,” she said. “My passion was animal conservation and digital media.”

While Hanna is unsure of where her artistic and communication interests will lead her after graduation, she is excited about what the future may hold.

“The most important thing is getting the message across to people and with digital media, photography and communication, that’s your job,” she said. “I hope to do that eventually in other places and in other countries, to spread the word of animal conservation.”