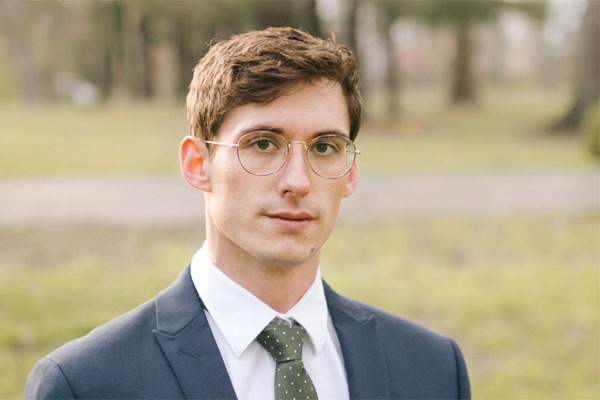 Editor's Note: The Happy Beginnings series features recent Ohio University College of Arts and Sciences graduates who are getting started in careers, graduate school and service.

Ohio University alumnus Sebastian Johnson has his sights on a career in constitutional law.

He graduated this spring with a B.A. in Philosophy from the Honors Tutorial College (HTC), and his next step is the University of Cincinnati College of Law in the fall.

His intellectual journey at OHIO traveled through Enlightenment philosophers, influential Western writers, and even visits to Oxford and Cambridge.

"I would not say that I followed a ‘path’ to get where I am today. Rather, I set a goal and pursued it, come what may. I knew that I wanted to attend law school and knew that required great grades, which meant I needed to take my studies seriously. Studying something I was interested in made that easier and more intellectually satisfying. It was merely that I do something I was interested in (philosophy) and take it seriously e.g., go to class, go to office hours, and build great relationships with my professors," Johnson said.

Honors Tutorial College gave Johnson the opportunity to take a multitude of philosophy courses and to conduct research one–on–one with a professor every semester.

"It is easier to take studying very seriously when you are so interested in the material, and the narrow focus allowed me to build relationships with many in the Philosophy Department," Johnson added.

One of those relationships was with his faculty mentor Alyssa Bernstein, Ph.D., with whom he would spend hours reading and discussing the work of Immanuel Kant, among others. Kant was an 18th century German philosopher from the Enlightenment era whose writings on critical philosophy, including the "Critique of Pure Reason," still influence modern rationalism, ethics and aesthetics.

Johnson's HTC thesis, “The Rule of Law and Its Normativity: A Kantian Conception,” which probed the connection between law and morality, was the culmination of four years of hard work and critical thinking.

"From my philosophy education at Ohio University I have learned, first, how to critically analyze and interpret dense arguments. Second, I have learned to construct and translate arguments into concise and organized writing. Third, and perhaps most importantly, I have learned how to efficiently and effectively manage my time. Regardless of the career path one chooses, these are valuable skills that the study of philosophy will help one to cultivate,” Johnson said.

Johnson also was an undergraduate fellow with the Menard Family George Washington Forum, where he met bi-weekly with faculty and other fellows to "read and discuss some of the most influential books for Western society. In my last year, we took a trip to the United Kingdom where we discussed the books we had read with professors from Oxford and Cambridge."

He also did a PACE (Program to Aid Career Exploration) internship with the Institute for Applied and Professional Ethics.

A: Dr. Bernstein was my favorite professor. I took nearly every course she offered, took several tutorials with her, and she was my thesis advisor. She is, undoubtedly, a terrific professor and philosopher. However, she was also a friend. Completing a thesis is accompanied by an immense amount of stress. A few of our meetings were spent just talking, about life plans, struggles, and other interesting books. Having a professor who you can engage with not only academically but also in a friendly way was terrific.

Dr. Bernstein always encouraged me to “enjoy the learning,” which may sound trivial at first – if only it was that easy. I found that her advice to be much more insightful than I originally thought. I understand it, now, to be advice about how to approach a task, like a midterm paper, final paper, or thesis. Instead of understanding those tasks as “something to be done,” I began thinking of them as opportunities to engage in philosophy and to learn something new. An opportunity to flex the mental muscles, so to speak. This will certainly be useful advice for law school.

A: The hardest hill I had to climb was certainly my final year. It was busy; I was working on law school applications,  my thesis, and staying involved in the George Washington Forum and my other classes. Then, my mother passed away. The relationship I had built with Dr. Bernstein was integral in overcoming that difficult time. In some of our meetings, we would take breaks from the dense and complicated thesis work to just talk. This relieved a good deal of stress and also allowed me to process the passing of my mother, without getting behind on applications, coursework, or my thesis.

School doesn’t stop when life happens, but having a resource within academia to deal with life’s misfortunes is the next best thing, I think.

A: My favorite OHIO memory is the Honors Tutorial College graduation dinner. It was really nice to see my fellow graduates and to learn about the projects and theses they had completed and learn what they were to do next. Because many of us are in different disciplines, we lost touch. Some faculty were there, and it was great to see and thank them for all they had done for me over the years. It was a terrific way to finalize my four years at Ohio University.

A: I would encourage new Ohio University students to not miss the opportunities for extra-curricular clubs, activities and academic opportunities. Even if you are greatly interested in what you are studying, like I was, it is nice to have a break and to engage with students from other disciplines. There are numerous clubs and groups on campus, finding one for you is certainly possible. Attending public lectures, too, is a great way to take a break from your studies.