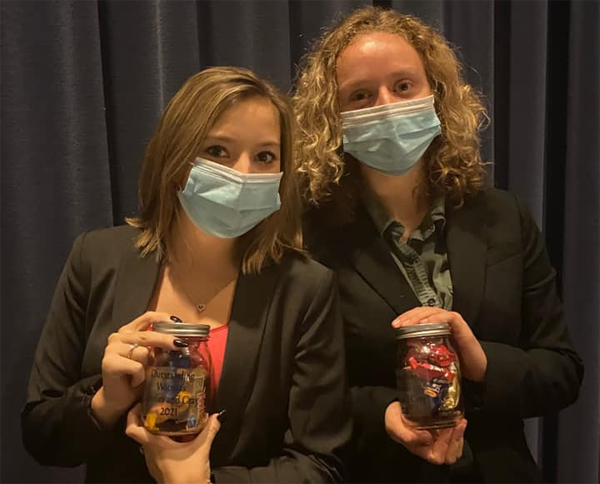 The tournament was conducted in person, OHIO’s first in-person tournament since February 2020.

OHIO Mock Trial has two teams, and they competed in four different trials. Each side of the case, the prosecution and the defense, performed once over the course of two days, with witnesses often performing in both trials.

During the closing ceremony, Ohio University students Leighton Heiner and Megan Taylor were granted outstanding witness awards based on rankings by trial judges. Both are first-time Mock Trial competitors.

Taylor was awarded for her witness portrayal as a defense witness and was shocked when she heard her name called.

“It was so much fun to be a part of this team and work with both of my amazing attorneys. We worked very hard and put a lot of detail into my witnesses – and that work paid off. It was even more incredible to win a witness award at my first ever competition. I am so thankful to my entire team and so proud of our performances,” she said.

Taylor is a sophomore majoring in history pre-law with a minor in Spanish in the College of Arts and Sciences. Heiner is a first-year student majoring in philosophy. Both students were recently accepted into the highly competitive Undergraduate Certificate in Law, Justice and Culture.

“Competing at OSU’s annual tournament provided a unique opportunity to test our legal and logical reasoning skills against some of the best teams in the country, as well as a satisfying return to the real courtroom settings that help us learn so much about the legal field through this activity,” said Colin Schilf, Mock Trial treasurer and a second-year competitor.

“As someone who has been tasked with helping develop our program’s new talent this year, I especially appreciate that Scarlet and Gray provided a stage for our team to demonstrate how much their understanding of the case has developed since we began the season,” Schilf said.

Schilf is a junior studying HTC chemistry and was recently accepted into the certificate in Law, Justice and Culture.

The trials took place at the Franklin County Courthouse with individual judges graciously allowing competitors to utilize their courtrooms. The courtrooms were equipped with barriers framing the judge’s bench, jury and witness boxes, and counsel tables – creating a new environment for students to adjust to during their case presentations.

“While the COVID-19 precautions did limit the mobility of attorneys during questioning and changed the way we all could interact with evidence, I was so impressed with the flexibility of all the competitors. If anything, everyone was so much more intentional with their movement and voice fluctuation because of the masks and shields. I am so proud of my teammates who took these challenges and used them to their advantage,” said Ellen Gill-Franks, a senior studying English pre-law and sociology-criminology with certificates in Law, Justice and Culture and Strategic Leadership.

The Scarlet and Grey tournament was the first of many invitationals that Ohio University Mock Trial will compete in to prepare for the Regional Tournament in late February.

Preparing for competition, with alumni judges

Ohio University Mock Trial consists of two teams, the Green Team and the White Team, each composed of 10 students. Each student was required to try out for the team. The organization provides students with an interest in law the valuable experience of working with and preparing a case in a competitive courtroom setting.

The teams are required to prepare the case that they are provided by the American Mock Trial Association. This year, more than 600 teams from 350 colleges and universities in the United States will participate in AMTA’s tournaments. Each team member is assigned a part as either an attorney or a witness. Attorneys are required to develop a case theory, as well as developing direct and cross examination questions, creating opening statements and closing arguments, as well as learning the case law and rules of evidence. Witnesses are given the task of creating a character from the case and working with their attorney to develop their character and testimony.

The team is coached by Larry Hayman, Esq., assistant director and pre-law advisor at the Center for Law, Justice and Culture in the College of Arts and Sciences and The ACE.

In order to prepare for the Scarlet and Grey Invitational, the two teams scrimmaged against one another on Oct. 21 in Bentley Hall. This scrimmage was judged by Ohio University alumni attorney Patrick McGee and Law, Justice and Culture M.A. student Daniela Grijalva, who earned a B.A. in global studies-Latin America in 2021. Both judges provided key insight and critique for the teams to consider prior to competing.

“It was incredibly helpful to have the opportunity to present my materials in front of an attorney prior to competing at the Scarlet and Grey Invitational. It was great to get feedback from an experienced attorney who has tried hundreds of cases,” said Diamond Brooks, a senior studying HTC political science, noting the importance of obtaining feedback from McGee.