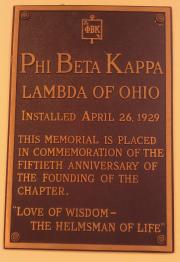 Phi Beta Kappa is an honor society that recognizes exemplary academic achievement and shows a commitment to the liberal arts and sciences and to freedom of inquiry and expression.

Five students at the College of William and Mary founded Phi Beta Kappa in 1776, during the American Revolution. For over two and a quarter centuries, the society has embraced the principles of freedom of inquiry and expression, disciplinary rigor, breadth of intellectual perspective, the cultivation of skills of deliberation and ethical reflection, the pursuit of wisdom, and the application of the fruits of scholarship and research in practical life.­ Phi Beta Kappa champions these values in the confidence that a world influenced by them will be a more just and peaceful world.