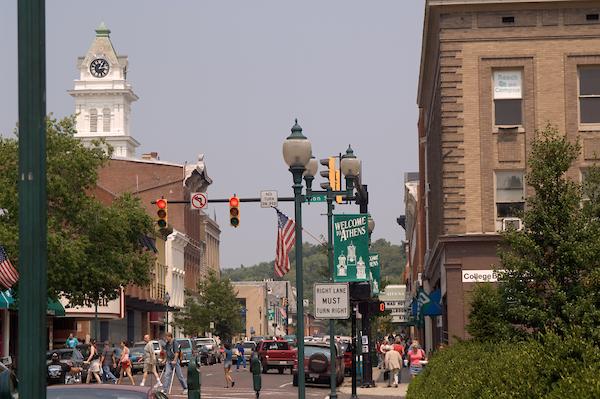 Despite being a small town of about 25,000 people, Athens offers many of the amenities of a larger city, including great restaurants, coffee shops, music venues, theaters, salons, and public transportation. That's why USA Today/10Best ranked Athens, the No. 1 College Small Town.

No matter what time of year you visit, Athens hosts major events that draw the community together in celebration. Experience the Ohio Pawpaw Festival, OHIO's homecoming parade and football game, the Athens International Film + Video Festival, the Spring Literary Festival, and many other exciting events.

Located in the foothills of the Appalachian Mountains, Athens sits in the hilly, forested part of Ohio. Outdoors enthusiasts have dozens of hiking and mountain biking trails nearby. And there's even more to choose from in the nearby Hocking Hills region with canoeing, rock climbing, ziplining, and horseback riding.

For music lovers, Athens has a number of venues that showcase live musical acts throughout each week, including everything from hip hop to bluegrass to rock. You can also attend one of OHIO's School of Music recitals or a concert by one of the singing groups on campus.

For foodies, Athens boasts one of the most vibrant local food scenes in the nation. Uptown Athens is home to dozens of restaurants, most of which are locally owned. There are also farm-to-table options which include Jackie O's Pub and Casa Nueva Restaurant, a worker-owned cooperative that has purchased from local farmers since the 1980s. Locally owned ethnic options include Mexican, Chinese, Mediterranean, Indian, and Thai.

Ready to Take the Next Step