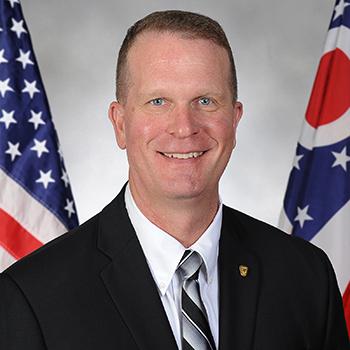 John Born is a Visiting Assistant Professor, Executive in Residence at the Scripps College of Communication and the Voinovich School of Leadership and Public Affairs.  He served as Director of the Ohio Department of Public Safety from 2013 to 2019 after reaching the highest rank and serving as Colonel of the Ohio State Highway Patrol from 2011 to 2013 capping a 26-year law enforcement career. He served for five years as the federally designated Homeland Security Adviser to the Governor.

As Director, he led statewide public safety efforts through global crises such has the 2014 Ebola outbreak and numerous other crisis events including terrorism cases, tornadoes, floods, opiate overdose deaths, school shootings, civil unrest, and cyber-attacks. He also served as the Patrol’s first ever public information officer including during several nationally and internationally covered crises and developed related law enforcement and first-responder media relations training used in Ohio and the United States.

He developed the Safer Ohio Initiative that incorporates a comprehensive strategy of emergency preparedness and also led the state's coordinated security efforts for the Cleveland Republican National Convention and helped institute the first-ever policy, training, and security improvements for Ohio’s 55,000 state employees including the state capitol building and surrounding area. He also led the growth of Ohio’s public-private partnership (OP-3) to over 600 participating businesses, corporations and organizations and has produced security enhancement models such as the Mall Active Shooter toolkit utilized throughout the nation and world.

He holds Bachelor of Science in Journalism and Master of Social Science in deviant behavior degrees from Ohio University and completed the FBI’s National Executive Institute, governance training at Harvard Business School and leadership training at the United States Army War College. He served as co-chair of the Ohio Collaborative Community-Police Advisory Board; co-chaired the State Emergency Response Commission; and served as Chairman of the Board of one of Ohio’s five state pension systems.