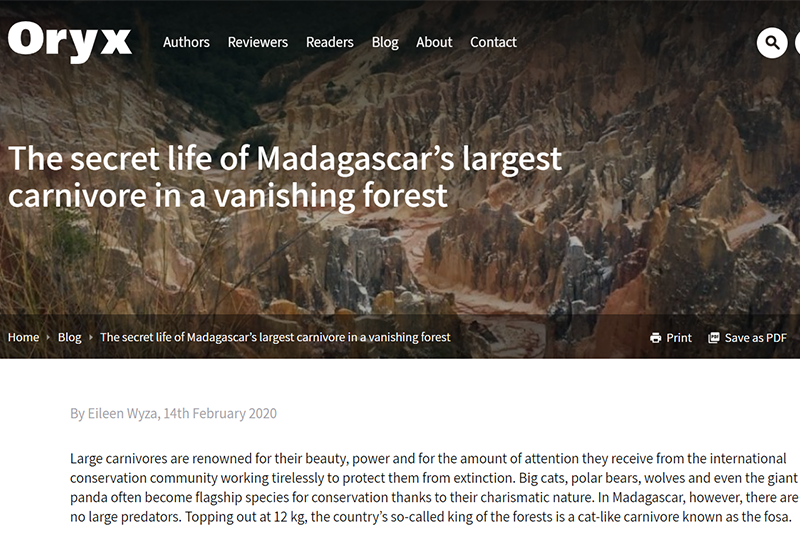 An alumna of the Voinovich School’s Environmental Studies program recently published an article that was featured on the blog of Oryx, the journal of Fauna & Flora International.

Oryx published Eileen Wyza’s paper about the largest carnivore in Madagascar, the fosa. Wyza, a 2017 graduate of the Master of Environmental Studies program, is currently pursuing her doctorate in biological sciences at Ohio University.

The abstract: The Vulnerable fosa Cryptoprocta ferox is the largest native carnivore in Madagascar, fulfilling a unique ecological niche in the island's remaining forests. Negative interactions with humans threaten the long-term viability of most remaining fosa populations across Madagascar. Threats to the fosa include habitat loss and persecution by humans resulting from perceived predation on domestic animals. We used GPS collars to record space use and activity patterns of five fosas in Ankarafantsika National Park, Madagascar, during the dry seasons of 2016 and 2017. The results, with up to 2,110 recorded locations per individual, indicated fosas’ home ranges and movements were not limited to the forest, and all collared individuals used networks of habitat patches and corridors to navigate deforested areas. The fosas studied in Ankarafantsika National Park had significantly larger home ranges than those reported in previous studies in other protected areas. They were rarely found within village boundaries and appeared to avoid areas of human habitation, suggesting that during the study period livestock was not a significant component of the fosas’ diet in this Park. Our results suggest that fosas have some flexibility that enables them to adapt to living near deforested and human-dominated areas by altering their space-use patterns, but they are compensating by increasing their home range size.