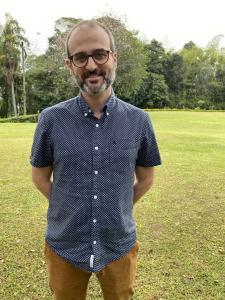 Matthew deTar (PhD, Northwestern University) is an Assistant Professor of Rhetoric and Culture in the School of Communication Studies at Ohio University. His research focuses on concepts in public discourse that produce national identity and political action, focusing particularly on Turkey and the Middle East. He is the author of Figures That Speak: The Vocabulary of Turkish Nationalism (Syracuse University Press, 2022) which analyzes the main concepts that shape political and historical understanding in Turkey. He has authored essays on conceptual history, public memory, race, and anti-colonial rhetorical methods that have appeared in Communication and Critical/Cultural Studies, Rhetoric & Public Affairs, Departures in Critical Qualitative Inquiry, Advances in the History of Rhetoric, The Oxford Encyclopedia of Race, Ethnicity, and Communication (ed. Sudeshna Roy), and Reframing Rhetorical History: Cases, Theories and Methodologies, ed. Kathleen J. Turner and Jason Edward Black (University of Alabama Press, 2022). His research has been supported by the Center for Religion, Law, and Democracy at Willamette University, the Institute for Turkish Studies at Georgetown University and the Roberta Buffett Center for International and Comparative Studies at Northwestern University.

More information on his book can be found at https://press.syr.edu/supressbooks/3933/figures-that-speak/.