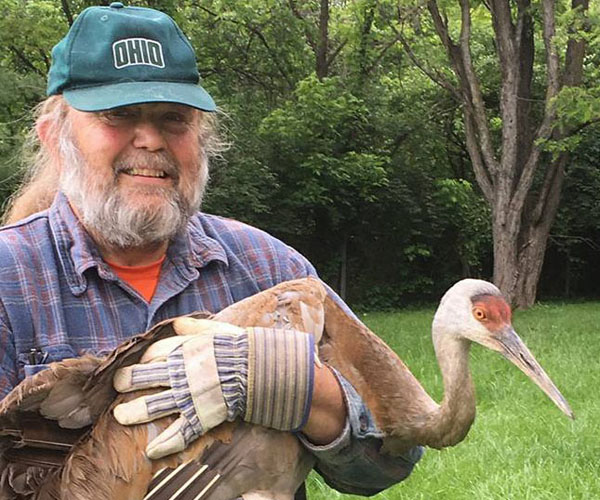 Scott Moody with a Sandhill Crane in 2017.

Moody, who was named Associate Professor Emeritus in 2014 but continued teaching part-time in the Biological Sciences Department in the College of Arts and Sciences, came to Athens in 1979 straight from his Ph.D. at the University of Michigan. He was hired to teach medical gross anatomy in OHIO's medical school (now the Heritage College of Osteopathic Medicine) and taught medical anatomy into the mid-late 1990s.

His wife, Rose Isgrigg, said Moody is now fulfilling one more role in service to science, as his remains have been donated to the Body Donor Program in the Heritage College of Osteopathic Medicine. She said that after this role is complete, in about a year and a half, his remains will be cremated and a service will be held.

"So, there are generations of osteopathic medical students in addition to all the biology students who were impacted by Dr. Moody. It's emblematic of Scott that he donated his body to medical education so that he can continue to teach even after his passing," said Larry Witmer, professor of biomedical sciences in Heritage College.

A scientist who believed in evidence

Moody was at home in the classroom, challenging students to put scientific principles to work, and in the wild, where he was passionate about the amphibians, reptiles, birds, and mammals that make their home in the Ohio River Valley.

Teaching forensic biology in the second half of his career at OHIO, Moody told his students that scientists don’t “believe” in things, not even gravity and evolution. They investigate and test hypotheses with evidence and assess the probability of truth or falseness.

Moody loved using his famous sasquatch lecture to demonstrate how to look for evidence. In 2013, he added a DNA component to his lecture, noting, “I’m 2.9 percent Neanderthal,” and looking all the part in his hallmark full beard. (See his 2013 lecture Sasquatch DNA: A Red-Haired Sister to Humans?)

"Scott’s teaching style was Socratic. With his thoughtful questioning, he expertly guided us to reflect on the broader implications of specific concepts and examples that he presented in his lecture. In the field, Scott is a naturalist in the most classic sense. His almost boyish fascination for salamanders, frogs, lizards, and snakes combined with a deep understanding of the local ecology was truly inspiring," wrote alumna Shylaja Akkaraju, Ph.D., professor of biology at CUNY Bronx Community College, in a nomination letter for Moody in 2021.

"Without effort, he got his students interested in the philosophy of subjects such as herpetology, systematics, physiology, and anatomy. As we learned about the ideas of Popper and Hennig as philosophers and thinkers, he also covered the nitty-gritty of the concepts and methods that were based upon these ideas. He was so enthusiastic about anatomy that I eventually ended up liking it until this day! He challenged students to go farther than what the textbooks contained, and to think about ways to put the concepts into to practice," wrote alumna Vivian Páez, '95 Ph.D., now a professor at the Universidad de Antioquia Medellín in Colombia.

Moody researched frog, salamander, and snake populations in southern Ohio. He could be found in the field with study subjects including Black and Blue Racers (a snake), Queen Water Snakes. Timber Rattlesnakes, Spade-footed Toads, and Ravine Salamanders. He co-authored the "Ohio Turtle, Lizard, and Snake Atlas" and received the 2021 Herbert Osborn Award from the Ohio Biological Survey. (See Moody Recognized For a Life Spent Studying Snakes, Salamanders, Frogs, Much More.)

"Scott was a member of OCEES (Ohio Center for Ecological and Evolutionary Studies) from the very beginning and a staunch advocate for all things evolution and the science that supports it. Although he had officially retired, he remained active, attending Ecolunch, seminars, and most importantly tirelessly curating the Biological Sciences vertebrate collection," said Willem Roosenburg, director of OCEES and professor of biological sciences.

"Scott also was a tremendous resource for all the herpetologists in the department, providing information and locations where to find different herps in Ohio. His knowledge also served OH-DNR helping to preserve rare and endangered reptiles and amphibians throughout the state. Scott was lifelong teacher who was well liked by his students and had a penchant for teaching interpretation and critical thinking skills. His positive contributions to OCEES students and faculty will long be remembered," Roosenburg said.

Witmer defined Moody as "an institution" in the ecology and evolutionary biology community, both at the university and the naturalist community in Southeast Ohio. "Scott was the purest naturalist that I've known, with an encyclopedic knowledge of local fauna and flora."

Moody also gave popular Science Cafe talks, where he introduced many non-biologists to the importance of reptiles in the ecosystem. (Watch his 2019 Science Cafe on Endangered Species of Amphibians: Why Their Survival is Vital to our Health.”)

A colleague and mentor

"Scott was maybe the first OU person I met, as he was the one who picked me up at the airport for my job interview in 1995, and I think we bonded as kindred spirits on that car ride," Witmer said. "We taught medical gross anatomy together in my first couple of years, and he's remained a valued mentor to this day. Ever the biologist, he often donated his deceased pets—as well as his knowledge—to research in our lab. One recollection is the time Scott called me on the phone, choking back tears as he held his pet turkey Palmer in his arms, and asked me if we wanted a freshly deceased turkey for our research (the answer was a respectful yes). Again, always a biologist, always thinking of others. I'm among the many, many people who will miss him deeply."

Bob Colvin, professor emeritus of biological sciences, described Moody as "the consummate scientist, teacher and all around good guy, all wrapped up in one. The department’s curriculum is shaped by the genius of Scott, and he will have a lasting legacy within the department and with the many students he impacted."

"Back in the days when the reptile room was on the third floor of Irvine, Scott first taught me how best to catch an escaped snake, which seemed to have a propensity to hide in the women’s restroom. Also, Scott’s office in Irvine was a sight to see – not a square inch of floor space that wasn’t covered with papers and books – but I’m sure all organized in Scott’s mind.

"Scott often sent me articles that he had found regarding my area of research – Alzheimer’s disease, he kept abreast of many areas of biology. In fact, I would suggest that he could ably teach any course currently taught in the biology department (and probably has!). He is one of a disappearing breed – a biologist truly knowledgeable in all areas of biology and always thirsting to know more," Colvin said.

Moody was also active in the Ohio University Emeriti Association, where he had served as vice president since 2019.

"Scott was a most valued member of the Emeriti Association. For many years he volunteered to recruit speakers for the association’s luncheons, drawing upon his wide-ranging interests from historical societies to environmental and science interests. Thanks to his thoughtful service, emeriti were both entertained and intellectually challenged. Scott was always a gentleman as well as a scholar. He will be sorely missed," said Rosemary Rossiter, professor emerita of economics and president of the association.

Scott was a herpetologist and often gave hands-on presentations about snakes to groups both in and outside Athens County. He also managed and updated Camp Rotan, which was owned by the Kiwanis Club and served as a camping, recreational, and ecological center for the Athens community," said Thomas Franz, professor emeritus of Spanish in modern languages.

Moody's mentorship changed the course of many students' lives, including Páez.

"Even though I left Ohio almost 30 years ago, my sentiments and appreciation for what Scott meant to me have not faded a bit. He was a pillar for my growth not only academically but also as an educator and professional. I will always keep in my heart the fact that he accepted me as a student despite all my weaknesses—related mainly to my precarious English at that time—and was capable of seeing something in me and encouraging me to go on despite the challenges of being an international female with no funding or connections," she said.

"Scott taught me what it means to be a doctor of philosophy, the importance of ethics, and what it means to be a good teacher. Almost a fatherly role. This does not mean he was ever easy with my performance, and I got my share of corrections that were always so constructive and well-intentioned. I am very happy I had a chance to see him again in 2013 and also to maintain sporadic communications over the years that helped us stay in touch. It is clear to me that a big part of what I am, and what I have accomplished in my career is thanks to his support and guidance. I will miss him deeply," Páez said.