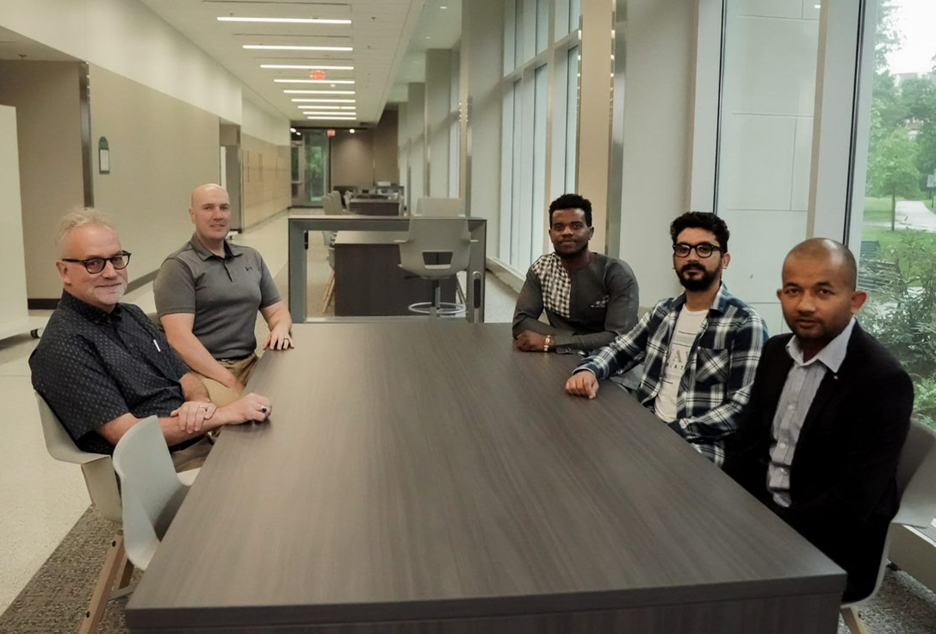 As the world's appetite for carbon-based materials like graphite increases, Ohio University researchers presented evidence this week for a new carbon solid they named "amorphous graphite."

Physicist David Drabold and engineer Jason Trembly started with the question, "Can we make graphite from coal?"

"Graphite is an important carbon material with many uses. A burgeoning application for graphite is for battery anodes in lithium-ion batteries, and it is crucial for the electric vehicle industry — a Tesla Model S on average needs 54 kg of graphite. Such electrodes are best if made with pure carbon materials, which are becoming more difficult to obtain owing to spiraling technological demand," they write in their paper, "Ab initio simulation of amorphous graphite," that published today in Physical Review Letters.

Ab initio means from the beginning, and their work pursues novel paths to synthetic forms of graphite from naturally occurring carbonaceous material. What they found, with several different calculations, was a layered material that forms at very high temperatures (about 3000 degrees Kelvin). Its layers stay together due to the formation of an electron gas between the layers, but they're not the perfect layers of hexagons that make up ideal graphene. This new material has plenty of hexagons, but also pentagons and heptagons. That ring disorder reduces the electrical conductivity of the new material compared with graphene, but the conductivity is still high in the regions dominated largely by hexagons.

The process of layer formation: starting with 1,000 randomly selected initial coordinates, the model was annealed at 3,000K, and layers after 60 ps (1 ps=10-12 second). Colors: green represents two coordinated atom, blue one, yellow three, red four. The layers emerging at the end are planes of amorphous graphene.

"In chemistry, the process of converting carbonaceous materials to a layered graphitic structure by thermal treatment at high temperature is called graphitization. In this letter, we show from ab initio and machine learning molecular dynamic simulations that pure carbon networks have an overwhelming proclivity to convert to a layered structure in a significant density and temperature window with the layering occurring even for random starting configurations. The flat layers are amorphous graphene: topologically disordered three-coordinated carbon atoms arranged in planes with pentagons, hexagons and heptagons of carbon," said Drabold, Distinguished Professor of Physics and Astronomy in the College of Arts and Sciences at Ohio University.

"Since this phase is topologically disordered, the usual 'stacking registry' of graphite is only statistically respected,” Drabold said. “The layering is observed without Van der Waals corrections to density functional (LDA and PBE) forces, and we discuss the formation of a delocalized electron gas in the galleries (voids between planes) and show that interplane cohesion is partly due to this low-density electron gas. The in-plane electronic conductivity is dramatically reduced relative to graphene."

The researchers expect their announcement to spur experimentation and studies addressing the existence of amorphous graphite, which may be testable from exfoliation and/or experimental surface structural probes.

Trembly, Russ Professor of Mechanical Engineering and director of the Institute for Sustainable Energy and the Environment in the Russ College of Engineering and Technology at Ohio University, has been working in part on green uses of coal. He and Drabold — along with physics doctoral students Rajendra Thapa, Chinonso Ugwumadu and Kishor Nepal — collaborated on the research. Drabold also is part of the Nanoscale & Quantum Phenomena Institute at OHIO, and he has published a series of papers on the theory of amorphous carbon and amorphous graphene. Drabold also emphasized the excellent work of his graduate students in carrying out this research.

"The question that led us to this is whether we could make graphite from coal," Drabold said. "This paper does not fully answer that question, but it shows that carbon has an overwhelming tendency to layer — like graphite, but with many 'defects' such as pentagons and heptagons (five- and seven-member rings of carbon atoms), which fit quite naturally into the network. We present evidence that amorphous graphite exists, and we describe its process of formation. It has been suspected from experiments that graphitization occurs near 3,000K, but the details of the formation process and nature of disorder in the planes was unknown," he added.

The Ohio University researchers' work is also a prediction of a new phase of carbon.

"Until we did this, it was not at all obvious that layers of amorphous graphene (the planes including pentagons and heptagons) would stick together in a layered structure. I find that quite surprising, and it is likely that experimentalists will go hunting for this stuff now that its existence is predicted,” Drabold said. “Carbon is the miracle element — you can make life, diamond, graphite, Bucky Balls, nanotubes, graphene, and now this. There is a lot of interesting basic physics in this, too — for example how and why the planes bind, this by itself is quite surprising for technical reasons."