Head in the clouds: Mendez follows his dream to fly 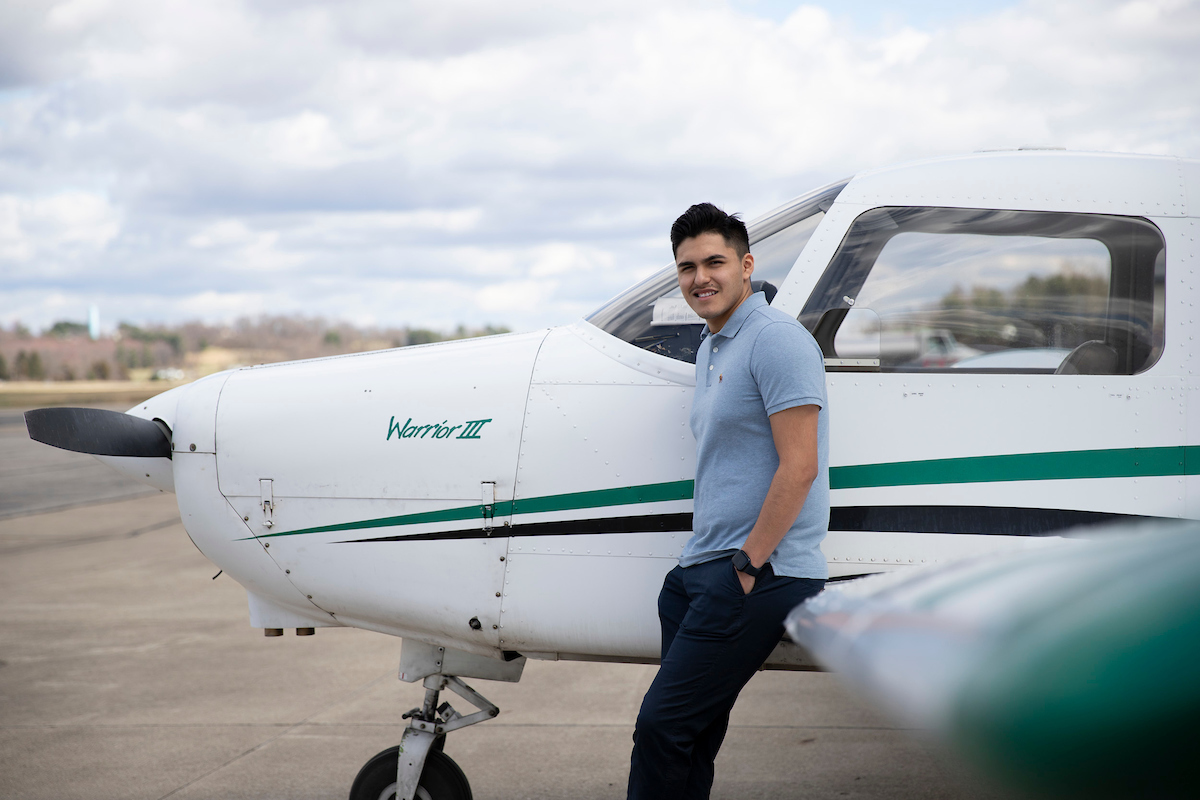 Through the support of his family, first-year aviation major Johan Mendez is pursuing his dreams of becoming a pilot.

Like any high school student, Mendez spent his last days of school imagining his next steps. He was confident he wanted to be a pilot, so when he found Ohio University’s aviation program, he knew he found the perfect fit.

“The first time I walked on campus was amazing. I loved the atmosphere and community, and it’s beautiful,” said Mendez.

While flying was his dream, he knew he would be challenged his first semester since he was away from both his family and the built-in structure of high school.

“I did struggle at first transitioning into the more independent lifestyle. It was hard focusing all my time on school,” said Mendez. “I ended up joining ROTC. It was the best fit for me. ROTC gave me routine, a set plan and a clearer idea of what I want my future to look like.”

ROTC gave Mendez the community support and structure he needed. He worked hard on his classes and worked hard to earn his uniform — an ROTC rite of passage. As he began to embrace his newfound independence, he found himself thriving at OHIO. Becoming a pilot was within his grasp and when he flew for the first time, his dreams were validated.

“It is so peaceful and it’s just you and the sky. You become one with the plane. Seeing the campus from 4 or 5,000 feet above is ridiculous. I could fly and never tell a soul. It’s a passion,” said Mendez reflecting on his first year as an aviation student.

As he began to experience time in the air and structure on the ground, Mendez gained confidence that he was going to succeed. He was awarded the “You Can Fly” scholarship from the U.S. Air Force, which was the perfect opportunity to show his family that his dreams were becoming a reality.

As both a first generation American and a first generation college student, resilience has been a value deeply instilled in Mendez by his family. His parents immigrated to the United States from Mexico when they were children, and they set their own goals to measure their success. They wanted to start their own business to ensure their family had everything they needed to flourish in the United States.

“They have always pushed me to do things I wanted to do even with little money. They didn’t go to college. Their goal was to buy a house and start their own business in five years and they did that. That is something that really motivated me finishing up high school. They can do all of this for us coming from nothing, which means I can do anything I set my mind to,” said Mendez.

As Mendez prepares for the future, he is excited to embrace every class as an opportunity to build his experience in aviation. He has already developed skills in landing, controlling the aircraft in flight and communicating through radio, which he will test during his first solo flight. He hopes to finish his degree and ROTC training to pursue his dreams in the U.S. Air Force. Throughout his daily triumphs as a college student, Mendez has never forgotten the value of his family.

“I think I am very fortunate to be able to have hardworking parents who put everything on the line for their kids. I don’t think I would be where I am without growing up and seeing their hard work and commitment for setting our futures up,” said Mendez.

Even though Mendez values his support from his family, he also sees tremendous value in gaining independence through the navigation of his college journey. He thinks it is important for every student to find where they fit by exploring clubs and organizations. After searching for his perfect fit, he found ROTC, but most importantly, he exposed himself to new opportunities to learn and grow.

“Try new things. Try things you never thought you would do. Sitting in your dorm and going to classes everyday isn’t going to do it. You really got to find yourself out here,” finished Mendez.