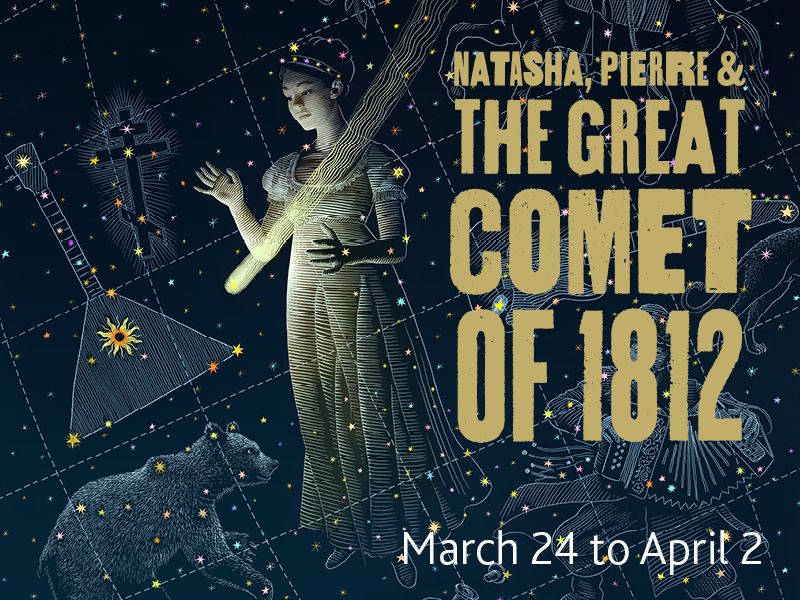 Originally planned to take the stage in spring 2021 and delayed due to the COVID-19 pandemic, Tantrum Theater, Ohio University’s professional theater in the College of Fine Arts, will produce OHIO alumnus Dave Malloy’s Tony Award-winning musical “Natasha, Pierre & The Great Comet of 1812.”

A preview performance of the musical, which has never been produced in the state of Ohio, will be held on March 24 and the show will run March 25-26 and March 30 through April 2 at 8 p.m. in OHIO's Forum Theater, located in the basement of the Radio Television Building (RTV). Tickets will be on sale soon and can be found on Tantrum Theater’s website. Ticket holders must show proof of COVID-19 vaccination and wear a mask to attend the show.

A critically acclaimed, sung-through musical, “Natasha, Pierre & The Great Comet of 1812” tells the story of the young and impulsive Natasha Rostova, who arrives in Moscow to await the return of her fiancé from the front lines. When she falls under the spell of the roguish Anatole, it is up to Pierre, a family friend in the middle of an existential crisis, to pick up the pieces of her shattered reputation.

“Natasha, Pierre & The Great Comet of 1812” garnered 12 Tony Award nominations at the 2017 Tony Awards ceremony — the highest number of nominations that season — winning two awards for Best Scenic Design and Best Lighting Design in a Musical.

In Tantrum Theater’s production, union actors, stage managers, and designers will work with OHIO students and faculty to bring the production to life. Actors Equity Association (AEA) actor David Rowen plays the role of Pierre; Erin Joy Swank, an Ohio native, is the AEA stage manager; Shirlee Idzakovich, an Ohio native, is a member of the United Scenic Artists (USA) Union and serves as the show’s costume designer; Eden Hildebrand is the show’s choreographer; and USA union member Jennifer Fok serves as the show’s lighting designer.

Marilyn Atlas, a professor in OHIO’s English department and scholar of the works of Leo Tolstoy, writes in her review that the musical embodies the major themes and styles found in Tolstoy’s work, which include, “how societies transform themselves… the impact of war… intimacy and the human heart…," themes that resonate in the world today.

Audiences “might think Tolstoy is too ‘hard’ for them (it is not),” Atlas writes. “Dave Malloy’s modern, pleasurable translation of a ‘War and Peace’ segment successfully captures in miniature themes developed in Tolstoy’s classic novel, and Malloy’s version adds, through song, rhythm, repetition, and voice, new stylistic dimensions to Tolstoy’s work.”

Tantrum Theater’s production of the musical also benefits from the talents embedded in OHIO’s School of Theater.

“While most performing arts training programs bring in working professionals to do a master class for an hour or two, Tantrum Theater is making much more of an impact on our students and our larger community,” Kenny said. “By welcoming working professionals of the highest level into our full rehearsal production process, our students get to share the rehearsal room and the stage with them for months. This type of long-term interaction can change the entire trajectory of a student’s future career path, develop their professional network, and inspire them to really develop their skills and work practices for future success in the art form and industry.”

Frederick said audiences will be rewarded for their long wait to see the work and will be treated to a truly unique music experience, thanks to Malloy’s mastery. “Natasha, Pierre & The Great Comet of 1812” was also nominated for Best Original Score and Best Book of a Musical at the 2017 Tony Awards.

"I had the great honor to work on Great Comet on Broadway and I’m incredibly excited to revisit Dave's boundary-breaking score with our students and the OHIO community," Frederick said.

Tantrum Theater’s Producing Director Josh Coy said that finally being able to stage the celebrated work at Malloy’s alma mater — and its premiere in Ohio — is an honor.

"This is a brilliantly creative musical that we believe our community will love, but especially so because it was crafted by one of our own,” Coy said. “We've been eagerly anticipating this production since prior to the pandemic and having to delay...has only heightened our anticipation to share Dave Malloy's unique vision with our supporters."