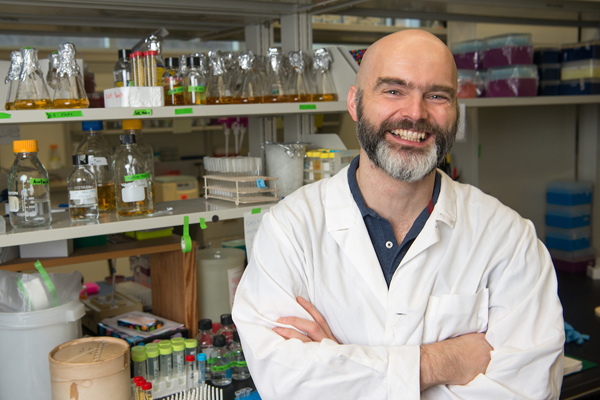 Carroll, associate professor of Biological Sciences, received his undergraduate degree in microbiology from Trinity College, in Dublin, Ireland, in 1999. He immigrated to the United States in 2004 and began his research with Ohio University in 2014.

"Dr. Carroll’s lab employs a wide variety of molecular and microbiology techniques while also providing an environment for undergraduate students at Ohio University to receive hands-on research lab experience,” Robert Colvin, Ph.D., professor and chair of Biological Sciences, said. "Dr. Carroll published a paper articulating his recent molecular breakthrough involving non-traditional RNA in 2019. Since then, his discovery has had a huge impact in the microbiology field, and his work has been cited over 20 times."

“It’s nice to be recognized with these awards, but we all understand that that’s not what it’s really about,” said Carroll, who believes the people who truly deserve to be recognized are his undergraduate lab assistants because they contribute an enormous amount of work in the lab that frequently leads to new discoveries.

Each cell of Staphylococcus aureus, the most dangerous of the bacteria commonly referred to as “staph,” is a tiny genetic machine with many two-component systems that sense the right conditions and then signal the cell to produce proteins that cause infection. All this protein-building activity is happening in a tiny manufacturing center called the ribosome. Ribosomes are specialized molecules made of about one-third proteins and two-thirds RNA.

Carroll's research team at Ohio University recently uncovered an 88-amino acid protein, and the gene where it resides, which could be a trigger that signals the cell to become virulent. Their eventual goal is to find a way to stop this process, to inhibit the gene from making the dangerous proteins. A recent $414,500 National Institutes of Health (NIH) grant is moving that research forward.

Carroll began his research on Teg41, a small RNA gene, in 2016. He soon discovered that the Teg41 gene is encoded directly next to four potent Staphylococcal toxins, called the PSMs. The PSM toxins are known to be a major contributing factor in Staphylococcal aureus skin infections.

Carroll’s initial research project took just under two years to complete, though there were a few obstacles to overcome. When Carroll got stuck trying to delete the entire Teg41 gene, which would inhibit the cell’s ability to make the Teg41 RNA, he reached out to a colleague at Kansas University Medical Center, Dr. Jeff Bose, to assist in navigating the problem. In the end, it was a mere 24 nucleotides that were cut out of the gene to confirm the clear-cut discovery that this regulatory RNA was responsible for producing the PSM toxins.

“It was one of those rare projects where stuff just worked,” Carroll said.

It was Ohio University alumnus Dr. Venki Ramakrishnan, who won the 2009 Nobel Prize for helping to decipher the riddle of the ribosome, that set the stage for a wave of genetic experiments looking at how the ribosome manufactures proteins, which are the building blocks of life.

OHIO undergraduates are also making a lot of discoveries in the lab today — and getting great experience that is propelling their careers.

What makes MRSA so virulent?

Currently, Carroll’s lab is focused on infections caused by methicillin-resistant Staphylococcus aureus, or MRSA. Carroll's team has already helped complete the genetic mapping of Staphylococcus aureus to include all small, or short, RNAs, which are often overlooked in global transcriptomic studies.

"This is important because in previous studies of the genome, no gene annotations were present at Tsr37. And that gene could turn out to be an important link for not only how the bacteria becomes virulent, but also potentially a way to stop it," Carroll said. Carroll's next step is to look even closer at Tsr37 to determine if its product is really a protein, or if it could be an RNA molecule.

The lab uses state-of-the-art proteomic and mass-spectrometry analysis to study protein production in the cell. Once they know what the gene is expressing — protein or RNA — their next step is to figure out how it acts as a catalyst in the two-component signal transduction system, called the Sae system, to increase the production of the dangerous proteins that cause infection.

Molecular researchers can use mutations in genes to help determine how a certain molecule is doing the work. Carroll's lab will use a number of SaeS variants containing point mutations known to alter SaeS signaling and kinase, or catalyzing, activity. This will help them understand exactly how Tsr37 activates the system.

Staphylococcus aureus is a versatile bacterial pathogen, capable of causing infection in virtually every niche in the human body. Its pathogenic versatility is due, in part, to a large arsenal of secreted and cell wall-associated virulence factors. Amongst these virulence factors are a number of adhesins, toxins, exoenzymes, superantigens, and immune evasion proteins.

"For the bacteria to cause infection, to be pathogenic, requires a complex network of regulatory systems to control coordinated and precise expression (genetic production) of this repertoire of virulence factors. And the Sae system is a major regulator and positively influences transcription of a large number of secreted and cell-wall associated virulence factors," Carroll said. "So our next step is to examine the contribution of Tsr37 to Staphylococcus aureus virulence."

Examining virulence means seeing how it works in vivo, or inside an organism, in this case mice.

"We anticipate that the results from this study will demonstrate that a short protein, Tsr37, acts as a potent activator of the Sae TCS. Understanding how a small peptide interacts with, and activates, the Sae system could inform future studies to design Sae inhibitors which could be used as a novel therapeutic to treat Staphylococcus aureus infection,” Caroll explained. “That's a timely need because it has recently been speculated that Staphylococcal aureus is the most common cause of human morbidity and mortality by a lone infectious agent in the United States (before the COVID pandemic). In addition, Staphylococcus aureus is a major public health concern due to the alarming rise of antibiotic resistant strains, in particular methicillin resistant S. aureus (MRSA)."