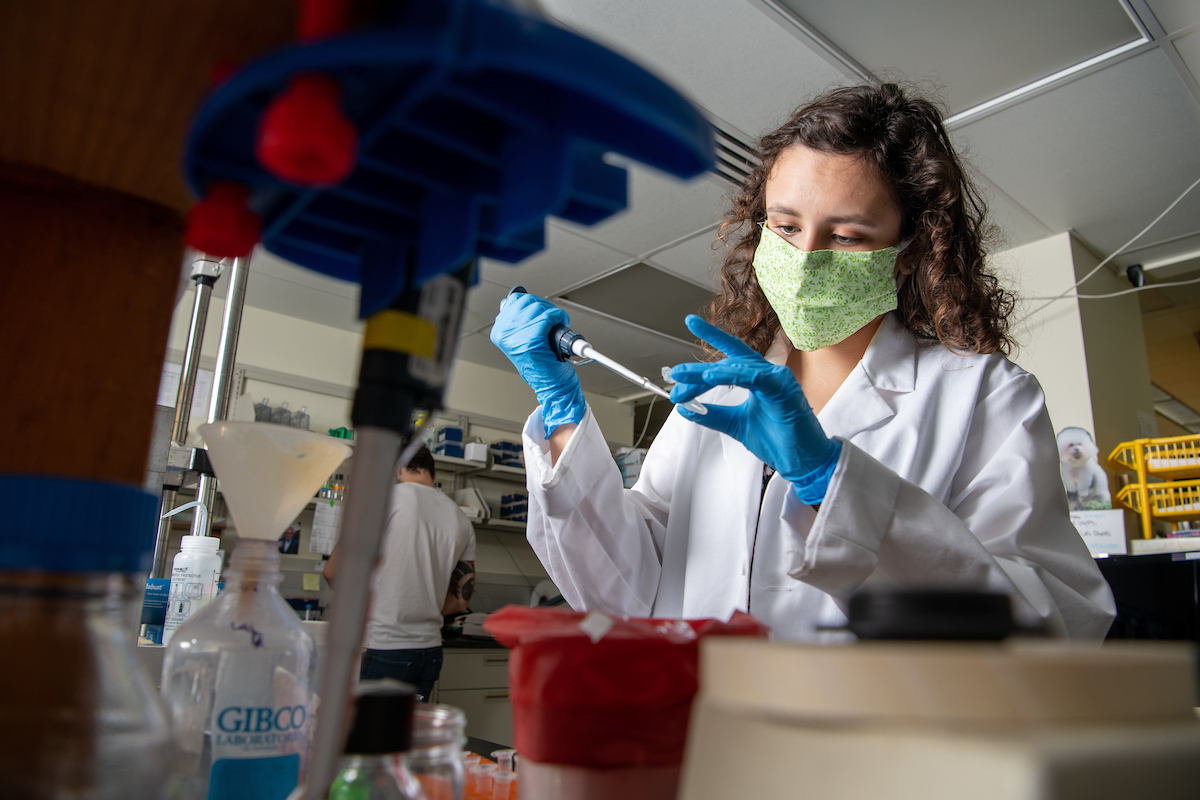 Chuckles erupt through one of Ohio University’s labs as Hailee Sorensen presents her latest research, “______ - Who is She?”

The laughter ensues not because of her research but because of a running joke with her peers where when she asks to learn more about a certain protein or introduces a topic, she begins by asking, “Who is She?” personifying the microscopic organism. The real question, though, is “Who is this young scientist?”

The simple answer is a senior Honors Tutorial College (HTC) Biological Sciences major, but Sorensen is much more than that. She is a Goldwater Scholar researching the bacteria Staphylococcus aureus (staph) and how it can cause a variety of different diseases in humans, with her overarching goal being to identify novel targets to inhibit the ability of staph to cause disease.

Coming to Ohio University as a freshman HTC student, Sorensen was presented with many tutorials that focused on the specifics of what makes up the broad definition of biology. One tutorial taught by her mentor, Dr. Ronan Carroll, assistant professor of biology, focused on microorganisms, specifically bacteria, and how bacterial infections are becoming more of a threat due to antibiotic resistance. After learning that nearly three million infections are caused per year by antibiotic-resistant bacteria, she began studying how drugs used to treat these infections are becoming less effective.

“I started working in Dr. Carroll’s lab as a freshman and since then have been learning how some bacteria that cause infections are becoming resistant to common antibiotics since the bacteria can actually find ways to avoid the prescribed drugs because antibiotics are often overprescribed and don’t target specific bacteria,” Sorensen said.

“I’m working to educate people that when they take an antibiotic it flushes the entire body of both good and bad bacteria, with the good needed to protect the body,” Sorensen added. “The drugs available to fight these infections aren’t specific enough, so my research is focused on looking at the individual virulence factors, or individual tools the bacteria utilize to cause infections, that we can specifically target to inhibit disease.”

In the lab, Sorensen and Carroll study staph and MRSA infections, the specific virulence factors each infection has, and ways to disarm them. They are working on a molecular level, looking at RNA molecules inside staph and how they contribute to disease.

“Hailee is a monster in the lab. She really has such a unique talent and to be able to do what she does as an undergraduate is astonishing,” Carroll said. “It is rare in my experience to have a student who can both understand and analyze the genomic data using computers and do the lab work that goes along with it.”

Part of the Goldwater application includes writing research goals and coming up with a project that correlates with those goals. Sorensen included this extensive research project in her application, explaining her goals to create research that eventually allows for more specific treatments to better combat bacterial infections.

Sorensen is one of 396 students selected nationally to receive the Goldwater Scholarship, which covers the cost of tuition, fees, books, room, and board up to a maximum of $7,500.

“I am incredibly honored to have obtained such a distinguished award and grateful to Dr. Carroll and my other mentors for teaching and working with me on this project over the last few years,” Sorensen said. “Receiving this award has also allowed me to connect with so many other amazing scholars who are great resources, sharing their knowledge and experiences with me.”

“I cannot think of anyone more deserving of being named a Goldwater Scholar than Hailee,” Carroll said. “She has put so much time and dedication into her project and has embraced presenting and conveying her research in a way the general public can understand.”

Carroll has recently submitted a paper to the journal mSphere titled “Reading between the lines: Utilizing RNA-Sequencing data for global analysis of sRNAs in Staphylococcus aureus,” in which Sorensen is the lead author. He added that this is the first time in his experience where an undergraduate student is the lead on a paper.