Dantas looks to Brazil, most prominent slave society in the Americas, for insight on Black freedom in the Age of Abolition 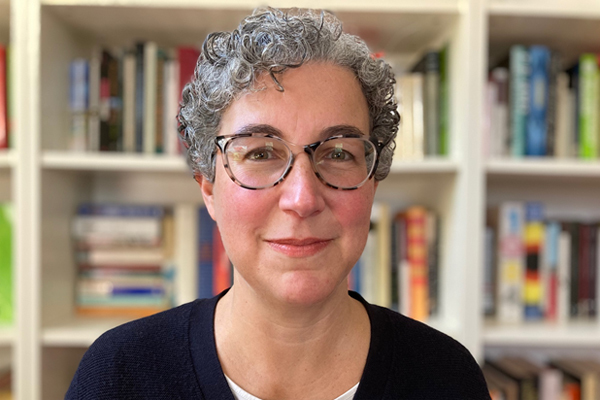 Ohio University researcher Dr. Mariana Dantas is delving into the rich history of slavery in Brazil to offer new insights on the Black experience within slavery and the pursuit of freedom, particularly through family-led manumission – the legal process through which an enslaved person became free.

Dantas, associate professor of history in the College of Arts and Sciences, is on faculty fellowship leave this academic year. During her leave, Dantas is working on a book titled "Family Stories in Black and White: family formation, race, and social mobility in colonial Brazil." She also is transcribing and translating key documents from her research that will be included in a possible companion website to the book.

During the months of November and December, Dantas will deliver four lectures on her research topic at the École des Hautes Études en Sciences Sociales in Paris as a visiting professor. As part of her activities in France, she was interviewed by the Brazilian channel of the French International Radio for a story headlined "White supremacy tried to reduce spaces of social mobility of blacks, says historian."

Among Dantas’ recent publications on the topic of slavery and Black freedom is the article she co-authored with Dr. Douglas Libby, professor at the Universidade Federal de Minas Gerais, which appeared in the International Review of Social History.

The article, “Families, Manumission, and Freed People in Urban Minas Gerais in the Era of Atlantic Abolitionism,” evolved from work Dantas and her Brazilian colleague and longtime collaborator Libby presented at the workshop Urban Slavery in the Age of Abolition held at the University of Leiden in 2017.

“We were put in charge of offering an explanation for why no strong abolitionist tendency developed in Brazil, even as the push to end first the transatlantic slave trade and later slavery itself spread in parts of Europe and the Americas,” Dantas said.

The two looked to their research on family ties and manumission practices in the urban centers of Minas Gerais to search for an explanation.

“Both Douglas and I have been tracing family formation among enslaved people in the mining district of colonial and imperial Brazil for a few years now. Those family histories reveal complex entanglements between the families of slave owners and of free and formerly enslaved Black people. We noticed that those entanglements helped to produce a consistent pattern of manumissions,” Dantas explained.

While manumission produced the freedom of only a small proportion of Brazil’s enslaved population, it was common enough in Brazilian cities and towns that it helped to form a large free Black population by the late 18th century.

“Because it was quite commonplace, manumission also helped to normalize Black freedom and to spread among enslaved people the notion that freedom was achievable. But as we argue in the article, freedom through manumission happened one individual at a time. And it inevitably resulted from social and financial negotiations between an enslaver and the enslaved, or between members of their respective families,” she said.

Consequently, Dantas and Libby explain, freedom for Black people was often perceived to be a household matter, settled between slave-owning families and the families of the enslaved. That reality discouraged efforts to pursue policy that would emancipate the entire enslaved Black population and thus abolish slavery in Brazil, at least until the second half of the 19th century.

"It is therefore quite important to understand the history of slavery in Brazil to understand slavery and freedom as global phenomena," Dantas said. “What is exciting about the study of manumission in Brazil is that it illustrates how freedom for Black people was not granted in a top-down manner, through state policy or imperial law. Instead, the notion that a Black person was entitled to freedom was crafted by individuals who often had to forfeit their own freedom to secure that of their children. But one by one they demolished the view that slavery was for life, and that Black people would always be subjected to slavery. They paved the way for the eventual broad acceptance of the abolition of slavery.”

During her faculty fellowship year, Dantas will also be busy with the activities of the Global Urban History Project (GUHP), an international research network focused on investigating the intersection of global and urban history which she co-founded in 2017. Among other events planned for 2021-22, Dantas is co-coordinating GUHP’s second mentorship program on the topic Cities and Inequalities. The program pairs emerging scholars with senior scholars and facilitates discussions that will help the participants complete an ongoing writing project, culminating in a spring symposium.