International symposium will probe Berlin and Cold War, impact on history and import for the future 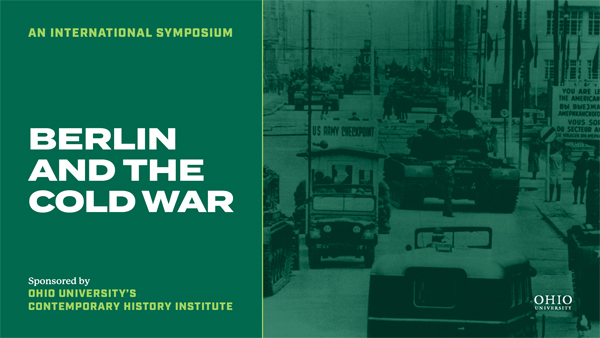 The Ohio University Contemporary History Institute (CHI) will host a virtual international symposium on “Berlin and the Cold War” — convened by Drs. Seth Givens and Ingo Trauschweizer — that brings together some of the leading diplomatic, military and political historians of the Cold War.

In three panel discussions on Oct. 1 and Oct. 2, scholars will consider Berlin’s role and place in the Cold War but also zoom out to broader issues of strategy and defense plans, national and alliance politics, and Cold War culture.

“Berlin and the Cold War will provide perspectives on the original Cold War that should help us engage with historical and contemporary questions,” said Trauschweizer, professor of History and director of the Contemporary History Institute. “With this conference, we’re building on the rich tradition of Baker Peace Conferences over the past three and a half decades, but we also know that this symposium will chart a new path forward for the study of Cold War frontiers, balancing the rising awareness of the conflict in and over the Global South with the need to keep a close eye on one of the hottest spots of the 1940s, 1950s, and 1960s, and the city that became a symbol for the Cold War’s end when the Berlin Wall fell in 1989.”

The symposium will also look at current events in the context of the Cold War.

“Today’s news often suggest that we’re entering into a new cold war — maybe with China? Or with Russia? Or with regional actors such as North Korea and Iran? The details are uncertain, and it is unclear whether the comparison fits, a point that will be discussed in our final talk by Wolfgang Mössinger, the German Consul General at Chicago who spent three-year terms in Moscow, Baku, and Donetsk, the latter two at the contested frontiers of what was once the Soviet Union,” Trauschweizer said.

Advancing new and innovative studies of the Cold War has been one of CHI’s missions since the institute’s founding in the 1980s. Many history Ph.D. graduates have excelled in that field — including co-convener Givens, now a historian at the United States Marine Corps History Division at Quantico, Va. Givens earned a Ph.D. in history and certificate in contemporary history from Ohio University College of Arts & Sciences in 2018 and was the 2014-15 Baker Peace Fellow. He also earned his bachelor's degree at OHIO, double majoring in political science and history.

“We believe that Berlin during the Cold War offers lessons for our contemporary world,” Givens said. Many of the challenges the West faces today are unresolved issues from the 1940s and 1950s, including Korea, the Taiwan Strait, and countries that border Russia, particularly Ukraine. Givens argues these areas, like Berlin during the Cold War, test Western resolve and unity.

“Complicating these challenges are questions of the durability of liberal democracies in Europe and the United States, a brazen Russia that meddles in Western polices, and the emergence of a mighty Communist Party-led China,” Givens said.

There may be new frontiers — notably, cyberspace, added Givens. “Washington Post national security correspondent David Ignatius argued just a few weeks ago we’re in a cyberwar with Russia, but is it the same old enemies and dynamics that shaped the second half of the 20th century?”

Throughout the years, the institute has brought leading scholars to Athens — and some of them are back for this event, notably Vladislav Zubok, who had one of his first jobs in “the West” here at Ohio University, Hope M. Harrison, Thomas Schwartz, and Christian Ostermann. Stephan Kieninger provided insightful comments and a terrific book chapter for the 2019 Baker Peace Conference and the institute also welcomes Petra Goedde, Erin Mahan, and Peter Ridder.

“This program would not be possible without our sponsors and partners — and three of them made us think of it in the first place: the main impetus was a grant competition of the Berlin-based Checkpoint Charlie Foundation, and we sharpened some of our thinking in communications with the Berlin Center for Cold War Studies and the Allied Museum,” Givens said. “For additional grant support, we are grateful to the German Foreign Office and its Consulate at Chicago and the Society for Military History.”

This event is also supported by the Baker Peace Studies Program and the Contemporary History Institute at Ohio University.

The symposium is free and open to the general public and will be livestreamed. Watch live or later on YouTube: