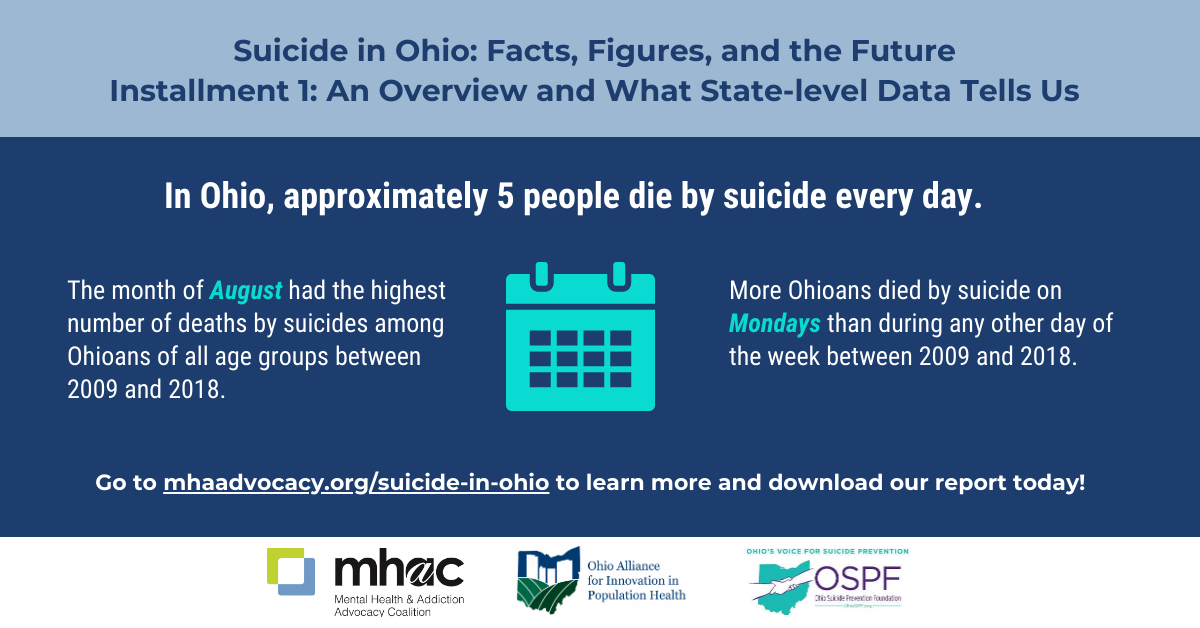 As COVID-19 continues to grip the nation and dominate headlines, suicide equally remains an important public health issue in Ohio.

Following the Suicide Prevention Plan for Ohio released by Governor Mike DeWine and numerous state partners, a new collaboration has created an analytical deep dive of data into suicide deaths between 2009-2018.

The Mental Health & Addiction Advocacy Coalition (MHAC), Ohio Alliance for Innovation in Population Health (The Alliance) and Ohio Suicide Prevention Foundation (OSPF) have produced “Suicide in Ohio: Facts, Figures, and the Future,” a report comprised of three installments,  which provide an overview of state and regional-level suicide data,  as well as data about the impact of and community responses to suicide in the northeast and southwest sectors of the state.

“Too many Ohioans don’t receive the mental health and substance use disorder prevention, treatment, and support services they need. That can, and must, be changed if we are going to reduce the devastating impact of suicide across Ohio,” said Joan Englund, executive director of the Mental Health & Addiction Advocacy Coalition. “Armed with the detailed data included in our report, local, state and federal policymakers, and other community leaders can take the steps needed to save the lives of Ohioans.”

In addition to an overview of the state’s data on suicide, the report also breaks down data for counties served by the MHAC in its northeast and southwest Ohio hubs, which include:

In comparison to the statewide statistics, the 13 counties that make up the MHAC’s northeast and southwest hubs have similar suicide statistics in terms of gender, age, race, marital status, educational status, and mechanism of death.

Within the hubs, a common thread among most counties is the existence of suicide prevention coalitions. These coalitions develop in response to the needs of a given community, with the intention of bringing community stakeholders in suicide prevention together to directly reduce local suicide rates. Members of these coalitions often include the local ADAMHS Board, behavioral health providers, schools, law enforcement, health departments and other prevention organizations. Activities range from collecting suicide death data in order to inform prevention efforts, raising awareness through events such as walks, and providing suicide prevention education through evidence-based programming in local schools and the community.

Rick Hodges, director of The Alliance, which is based at the Dublin campus, said suicide is a public health issue and hopes these collaborative installments would help to inform state- and community-level discussions surrounding how the risk of suicide can be reduced.

“This research provides a voice for the silent tragedy taking place around us,” Hodges said.  “It speaks to this disease of despair and calls us to act with empathy and compassion; it shows us how we need to improve opportunities for, and access to, care.”

Additional notable facts in “Suicide in Ohio: Facts, Figures, and the Future” include:

The study also examined calendar month and day of suicide. August accounted for the highest number of deaths by suicide (1,455), while February had the lowest (1,126). Suicide deaths were more likely to occur on Mondays (16.4 percent) and least likely to occur on Saturdays (12.6 percent).

“Suicides continue to climb in Ohio at an alarming rate and the need for data is crucial for Ohio and its communities to deal with it,” said Tony Coder, executive director for Ohio Suicide Prevention Foundation. “This report is key to helping us understand where our efforts should be to reduce suicides and save lives.”

Ohio is not alone. Across the country, suicide claims the lives of tens of thousands of people each year. In 2017, 47,173 people died by suicide — an average of 129 suicides per day — and accounted for nearly two-and-a-half times more deaths than homicides (19,510).

Suicide is the 10th leading cause of death overall in the nation and is the second leading cause of death among people between the ages of 10-34. The National Survey of Drug Use and Mental Health estimated that in 2017, 1.4 million adults made at least one suicide attempt. A 2019 report from the Ohio Youth Behavior Risk Survey showed that 6.8 percent of high school-aged youth reported having made at least one suicide attempt.

Exposure to suicide or suicidal behaviors can result in an increase in suicide and suicidal behaviors, according to the United States Department of Health and Human Services. Family members, friends and peers of a person who has died by suicide should be evaluated by a mental health professional.

Are you struggling with suicidal thoughts? Are you worried about a friend or loved one and need support? You are not alone. Your life is worth fighting for.

Media reporting on deaths by suicide are encouraged to utilize recommended guidelines provided by the Ohio University E.W. Scripps School of Journalism. These guidelines focus on limiting suicide contagion through careful story formulation, the use of language that doesn’t trigger thoughts of suicide, and providing resources that educate journalists and other writers about the complex array of conditions that cause suicide.